Last April, artists and culture professionals gathered in BOZAR, the Centre for Fine Arts in Brussels. They discussed the importance of culture for the European project and their concerns about the rise of populism and authoritarian tendencies in Europe.

Cultural Workers are invited to prepare for a European Renaissance through culture and science with artistic manifestations in Europe and Brussels from 2019 onwards. “Let’s reboot Europe starting with Culture”. This is the core idea of the project launched after that meeting:  Cultural Workers for Europe. This project is a call to all people who believe Europe is much more than institutions, single market or a reconciliation between only two countries (France and Germany). This is a project to claim Europe as a citizen’s space and culture as key element in the European reconstruction. Artists such as Luc Tuymans, Wolfgang Tillmans, Nedko Solakov, Laure Prouvost, Jonas Staal, Hans Ulrich Obrist and many others are subscribing this call. Sign the call, if you as a cultural worker or artist aim to:

1- Redefine Europe as a truly democratic project through ideas, stories, culture and art.
2- Develop a clear understanding of the power within Europe’s rich cultural resources to innovate.
3- Embrace the contribution of former and yet to come diasporas.
4- Help forge a new sense of collective purpose that goes beyond the accumulation of wealth.
5- Ensure the contribution of diverse heritage, craft, memory, and talent alongside research, science and technology.
6- Support and stimulate diversity, language exchange, and mutual understanding through cultural exchange and collaboration.
7- Invest in the learning of art and culture in formal and non-formal education to stimulate imagination, curiosity, creativity, critical and emotional intelligence.
8- Practice a culture of pluralism and integrity when designing public policies and public-private-people partnerships, fostering the commons.
9- Involve citizens in the renewal of Europe through a collaborative spirit and open exchange of ideas and cultures.
10- Create new pan-European networks.
11- Celebrate individuality, sharing, collectivity, complexity, freedom, criticality, joy, elegance, humour, gastronomy, and quality of life.
12- Unite in the struggle for a peaceful, prosperous, and diverse Europe.

The European Festivals Association supports the “cultural workers for Europe” because, we believe a better European project is possible, and culture has a much greater role to play in it. 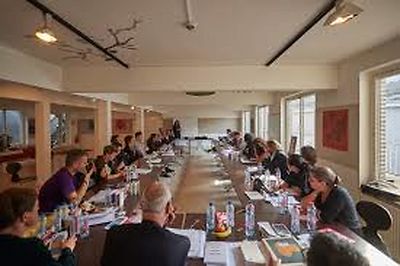