The Chorégies d’Orange Festival is opening on June 19 and will propose numerous concerts until August 5. The reknown festival has been a member of the European Festivals Association for over 25 years.

Created in 1869, Les Chorégies d’Orange is taking place in the Roman Theater of the city. It is the oldest french festival. The season starts with Musiques en fêtes, en direct des Chorégies d’Orange, a show that mixes different kind of musics : Opera, French songs,Musicals, operettas…

Each year, two operas are performed twice: This year, Aida (August, 2nd and 5th) and Rigoletto (July, 8th and 11th) both composed by Giuseppe Verdi, will charm the public. Directed by Mikko Franck, Director of the Philarmonic orchestra of Radio France, Bryn Terfel will sing the most famous bad boys’ melodies of the opera’s history.

Well-Known pianist, Jean-François Zygel will improvise music during the Movie The Phantom of the Opera, as a nod to the way it was presented in the early 20s. This cinéconcert will be performed live on July, 25th.

A special concert “Pop the Opera” will be presented in the Roman Theater of Orange. For the first time, 600 children will sing on stage. During the whole year, the Chorégies d’Orange has organized this educational project and is inviting everyone to enjoy the wonderful performance of that huge choir on June, 22nd.

Find out more about the Festival on their website: www.choregies.fr 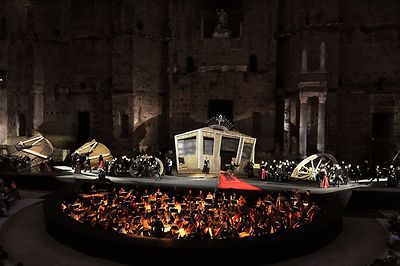