The 30th Rheingau Musik Festival will open on June 24, 2017 and will end on the 2nd of September.

Each year since 1988, Rheingau Musik Festival turns the whole wine region near Wiesbaden, Germany into an internationally renowned concert stage. Offering about 170 concerts over several months in over 45 venues – monasteries, churches and castles – it is the largest festival of its kind in Germany. Classical music is the main focus of the programme, but cabaret, lectures and jazz have a firm position too. The blend of international flair and regional charm makes the festival’s special attraction.

The 30th anniversary season is characterized by “awakening”. Together with top-class artists we developed artistically multifaceted series, which are influenced by the theme “awakening”: As the Artist in Residence, Igor Levit will be showcasing the entire spectrum of his talents at the Rheingau Musik Festival in six concerts, featuring music ranging from Beethoven to Rzewski. In the shape of Anna Lucia Richter, we are for the first time focusing on a songstress whose voice we will without a doubt find profoundly moving. In “Focus on Jazz”, we shall this year be spotlighting the pianist Michael Wollny who is is probably one of the most popular Jazzpianists. The 2017 programme’s keynote themes are “Next Generation”, “Dance!Music” and “Expedition Sound”. With the “Memories of Prades” series, we are living a long-cherished dream of the festival’s founder and Artistic Director Michael Herrmann: eminent musicians will be performing piano trio programmes that in the 1960s were played at Pablo Casals’ festival in Prades in the French Pyrenees. It was there that Michael Herrmann’s vision of a festival in the Rheingau first took root. 155 concerts will be held at 42 venues in the Rheingau and its neighbouring regions. The main venues are Eberbach Monastery, Johannisberg Palace, Vollrads Palace and the Wiesbaden Assembly Rooms. These are supplemented by numerous churches and wineries. Concerts will again be held at market church Wiesbaden, the parish church of St. Peter and Paul in Hofheim in Taunus and at the culture centre Schlachthof Wiesbaden. As new venues, we welcome on board the Casino society in Wiesbaden, the cathedral square in Geisenheim, the event centre kING in Ingelheim and the circle church in Wiesbaden.

The opening of the festival on June 24 will be a concert of the hr-Sinfonieorchester conducted by Andrés Orozco-Estrada at the beautiful venue of Kloster Eberbach. 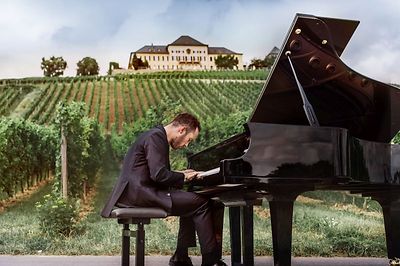