A summer tinged with culture awaits us once again in the Slovenian capital as the Ljubljana Festival brings an array of world-famous names to the city for its jubilee 65th edition.

Opera evenings at this year's Ljubljana Festival include a gala concert by Elīna Garanča, the operetta The Gypsy Princess, the chamber opera Svadba, Madama Butterfly performed by the China National Opera from Beijing, and the Mariinsky Theatre's performances of the third and fourth parts of Wagner's Ring Cycle. Highlights of the summer will also include performances by top soloists and orchestras. The St Petersburg Philharmonic Orchestra conducted by Yuri Temirkanov and the Mariinsky Theatre Orchestra with Valery Gergiev are both coming to Ljubljana.

Chamber ensembles include the Trio Astra, the Belgrade Philharmonic String Quartet, the Ulysses Quartet, contemporary music ensemble MD7, the Franz Liszt Chamber Orchestra and the Slovene Philharmonic String Chamber Orchestra. A more relaxed atmosphere will be provided by Roby Lakatos with an evening of Gypsy music, Tomaž Domicelj with new arrangements of popular works, Marko Hatlak and singer-songwriter Iztok Mlakar, and Vlado Kreslin. Sam's Fever will bring back memories of Elvis, the king of rock 'n' roll, while a musical evening of Highlights from West End and Broadway Musicals will cater for fans of songs from legendary shows.

The programme also includes the monodrama Immaculata, dedicated to the director Tomaž Pandur, who died suddenly last year, and an evening with preeminent actor John Malkovich, who will be joined by the famous chamber ensemble I Solisti Aquilani.

This jubilee edition of the Ljubljana Festival incorporates the 20th edition of the International Fine Arts Colony and creative workshops for children, a series of events on the river Ljubljanica, and concerts by the Branimir Slokar Academy. 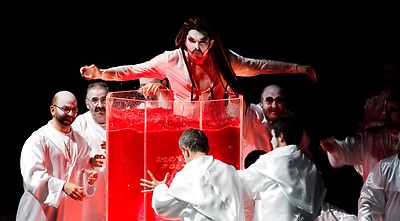