The Beiteddine Art Festival  is one of the leading festivals in the Middle East. It takes place in a large and magnificent 200-year old Palace in the Chouf Mountains, in Lebanon.

Each year, in the months of July and August, the Festival presents outstanding performances by world famous stars and Lebanese artists.
Concurrent with the performances, the Palace houses one or more international art exhibits.

The Festival's first edition was launched in the summer of 1985 amidst the war. It came as an act of faith in Lebanon's cultural role and power of creativity, a call for normality amidst the chaos and madness of war.

Beiteddine Art Festival's 2017 program was launched by its president, Ms. Nora Joumblat, at a press conference in March. At this occasion, she stressed again the importance of supporting cultural events in Lebanon.

Omar Kamal will start the festival with an opening concert on July 1st. Discover his beautiful voice: from the eternal repertoire of Frank Sinatra to the emotional hits of Arab legends. Omar’s incredible talent to sing powerhouse vocals makes him one of the most authentic and open artists to emerge in years. Omar Kamal will be accompanied by his Big Band and the Lebanese Orchestra. 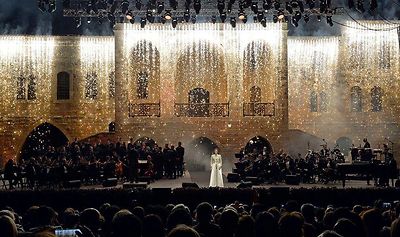