EFA visits the Festival Internacional de Teatro Clásico de Mérida. Yesterday night the festival presented Séneca by Antonio Gala directed by Emilio Hernández in the magic setting of Merida’s Roman Theatre. In the words of Emilio Hernández the piece “examines the endemic corruption of power and presents characters that are struggling to survive, with different weapons, in that swamp. It happened in the first century in Rome, but it is piercingly present to us “. Or, one could say, a piece that reminds us how humankind fails (or refuses) to learn from its past.

This was also the occasion to present the EFFE label to festival director, Jesús Cimarro, and the festival team that makes this festival succeed in engaging the audience in its proposals.

The festival runs until the 27 August with performances, cinema screenings, workshops and many more activities in several of the UNESCO human heritage sites of Merida.   Among other events the festival will present La bella Helena, La comedia de las mentiras, the Concierto de Arcángel with Las Nuevas Voces Búlgaras and Ana Moura, and Viriato.

Have a look at the full programme!

On the group picture you can see the International Festival of Classical Theatre Mérida team: 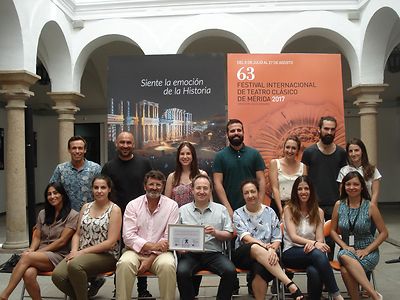