Extract of the press release from Ljubljana Festival

Closing of the 65th Ljubljana Festival

There is no question that this year's jubilee festival summer was an unforgettable and hugely successful achievement, covering a great variety of genres. We spent it in the company of world-class artists from around the world and top local talents. Undoubted highlights included the performance of Madama Butterfly by the China National Opera from Beijing, the remarkable film and theatre actor John Malkovich, Argentine pianist Martha Argerich, Latvian mezzo-soprano Elīna Garanča, the Catalan theatre company La Fura dels Baus with their production of Carmina Burana, and many others. Over the course of just over two months, the festival included more than 78 events seen by more than 57,000 spectators from Slovenia and abroad and featuring approximately 4,200 artists from more than 30 countries. This year, for the second time, the Ljubljana Festival also took place on pleasure boats on the river, offering a unique view of the city and a truly special experience accompanied by the performances of students from the Academy of Music and Conservatory of Music and Ballet in Ljubljana. The Ljubljana Opera and Ballet Theatre and the Grand Hotel Union joined the wide range of festival venues this year. The 65th Ljubljana Festival officially ends on 31 August, following the final events on the programme: a performance of the last part of Wagner's Ring Cycle, Götterdämmerung, and the closing concert of this year's festival. Wagner's monumental music drama will be performed by St Petersburg's Mariinsky Theatre, under the baton of charismatic conductor Valery Gergiev. A triumphant close to the 65th Ljubljana Festival will then be provided by the Mariinsky Theatre Orchestra, once again under Valery Gergiev, and Uzbek pianist Behzod Abduraimov.

The festival summer that has just passed was scorching hot, full of variety and very successful. In just over two months it offered more than 78 events that were seen by more than 57,000 spectators from Slovenia and abroad. All the events announced in the programme were performed as planned, and despite the damage to the roof of Križanke's summer theatre and the unpredictable weather, we were only forced to change the venue of two events. We will have to wait until the end of the year before we can talk about final figures, but a broad estimate places the budget for the events of the 65th Ljubljana Festival at €2,800,000. The City of Ljubljana, which also pays the salaries of Festival employees and some of the material costs, contributed €833,233 to the programme of the 65th Ljubljana Festival and other events organised by Festival Ljubljana in 2017. Contributions from sponsors and donors are estimated to be €880,000, while estimated ticket revenues (shared with the Festival's co-producers) are €730,000.

We end the 65th Ljubljana Festival with even more enthusiasm for our work, and with the belief that once again this year we have met expectations and enthused many new visitors. The biggest evidence of our success is the fact that every year the festival is able to boast a carefully chosen programme, first-class performances by some of the world's leading artists, and ticket prices that are accessible to a wide range of spectators. These are the reasons why the festival sells out, and why it also attracts visitors from neighbouring countries. A further contribution to its success comes from the numerous special offers available, including packets of tickets for multiple events and a 40% discount for young people still in education (a scheme that allows us to help raise the cultural awareness of the younger generation). We should not, of course, forget the loyalty of our sponsors and the support we receive from the City of Ljubljana and its mayor Zoran Janković, which enables us to invest in an even more impressive programme. In this spirit, we are already preparing the programme for the forthcoming 66th Ljubljana Festival. Until then, you are cordially invited to the 25th edition of the Young Virtuosi cycle, which begins on 19 October 2017, the 33rd Slovene Music Days, which run from 12 to 19 April 2018, and our programme of winter events at the Grand Hotel Union from 6 to 10 February 2018, which will help raise Ljubljana's profile as a top cultural destination even during the winter months.

Thank you for the interest you have shown in the Ljubljana Festival, and for your support. We wish you a pleasant autumn. 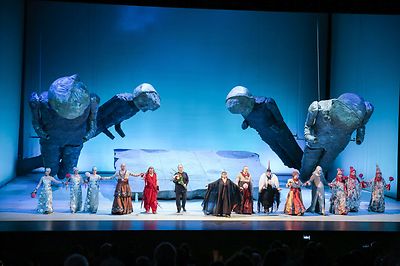