Romaeuropa Festival 2017: Where are we now?

79 projects with 60 performances as well as exhibitions, installations, conferences and training courses; 174 repeat performances in 24 different locations, for a total of 57,600 tickets for sale; 7 world premieres, 32 international programmes. Now in its 32nd edition and defined by Les Echos as: "An international festival that relentlessly pushes the boundaries of art", from 20 September to 2 December Romaeuropa convenes a battalion of over three hundred artists from 32 countries.

"We have formulated a question as the title for REF17 because right now, it seems the right choice for the period that we are living in", explained Fabrizio Grifasi, General Director and Artist of the Fondazione Romaeuropa presided by Monique Veaute. "The works of the artists make up a map of the present, as fragile as the house of cards that is our image this year, and no less ambitious. They go beyond aesthetic and gender categorisations into a conceptual geography that is constructed and deconstructed according to the strength of the interpretations". 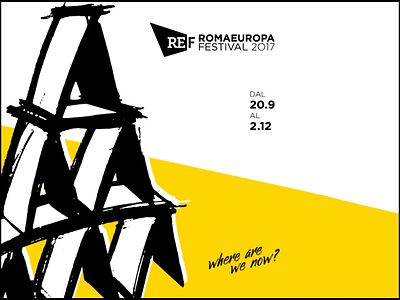