First Atelier for Young Festival and Cultural Managers in Shanghai

The Atelier for Young Festival and Cultural Managers took place from 17-23 October in Shanghai, China. The Atelier Shanghai is organised by The Festival Academy (initiative of the European Festivals Association, EFA) in collaboration with the Center for China Shanghai International Arts Festival, developed in the framework of the China-EU High Level People-to-People Dialogue between the People’s Republic of China and the European Commission and supported by the Ministry of Culture of the People’s Republic of China and by the European Commission through the newly set-up Cultural Diplomacy Platform.

The Atelier opened at the Shanghai Grand Theatre on the 17th of October. Mr. Yi Gong, Vice President of the Center for China Shanghai International Arts Festival, greeted the 44 participants coming from 16 different countries worldwide and the 4 mentors already present and welcomed them in Shanghai, center for tourism, finance, trade and creativity, and one of the most influential dynamic and creative cities in China.

Ms. Inge Ceustermans, Managing Director of The Festival Academy introduced the Atelier, a programme which brings together people from all over the world since ten years. She said during the opening:

“We need to be political. You are all people who will be able to influence the landscape in the coming years. What is your vision? What would the world look like if you had a magic wand? However small or big your festival or venue is, you have a platform to act and react from and to create a space for beauty, for inspiration, for questioning values, for human encounter. Use it!” You can read the full speech here.

"I wish I could be one of the Atelier participants. Art is like a rainbow and a bridge for souls. Art Festivals are places for beautiful encounters. We, artists and art professionals, are here to learn and grow. People come, people go - We continue to inspire and be inspired in celebration of art."

Unfortunately Mr. Ismail Mahomed, Chief Executive Officer Market Theatre Foundation, keynote speaker and mentor as well, did not make it to Shanghai but he addressed the participants with an inspiring and strong message:

Festival directors have their fingers on the pulse of the nation. They listen to songs, poetry and theatre to read the mood of the nation. They have the vision to curate expressions and thoughts in dynamic ways that bring people into discussion to find solutions and resolutions. Festival directors can turn dead walls that have been devastated by poverty and war into canvasses that breathe and express new life. Festival directors have the ability to take shouts of protests and to turn it into songs that of victory and celebration.”  You can read the full speech here.

7 days which allowed all people present a privileged insight into Chinese culture, meeting personalities and visiting venues of the Shanghai arts scene during the day (with special thanks to the Ming Contemporary Art Museum - McaM, the Shanghai Theatre Academy, the Shanghai Concert Hall and the Shanghai Symphony Orchestra), the Shanghai Performing Arts Fair – SPAF, and witness performances part of the China Shanghai International Arts Festival at night. But most of all these 7 days meant an inspiring gathering of 44 extraordinary individuals that moulded this edition into ‘their Atelier’ thanks to their vision, openness and engagement to exchange and create a unique time and space for all. 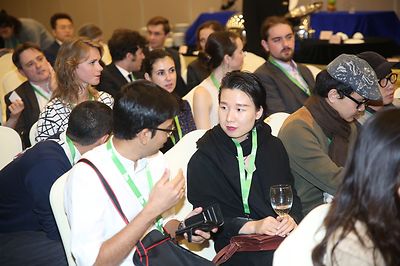