On 17 November The Festival Academy (an initiative of the European Festivals Association, EFA) launched the 12th edition of the Atelier for Young Festival Managers, taking place in Merano, Italy from 17 – 23 November 2017, co-organised and hosted by Meraner Musikwochen / Settimane Musicali Meranesi in collaboration with Italiafestival.

The Atelier opened at the Hotel Therme Meran with a warm welcome by Mr. Hermann Schnitzer, President of Meraner Musikwochen / Settimane Musicali Meranesi and Vice-President of the European Festivals Association, and Mr. Paul Rösch, Mayor of Merano, who greeted the 22 participants - coming from 14 different countries – and the mentors already present, in the magnificent and secluded city of Merano, surrounded by snowy mountains. Mr. Hermann Schnitzer underlined the importance of being connected to the local level when organizing a music festival, but to equally stay open to the international and global level, emphasising the fact that The Festival Academy will reach over 500 alumni, from almost 70 different countries, at the end of the Atelier Merano.

Ms. Inge Ceustermans, Managing Director of The Festival Academy, introduced the Atelier, a programme which brings together people from all over the world since ten years. She said during the opening:

"You can in the next days open up your perspectives, challenge your views and learn from each other. You are given a platform to meet and to make connections with a diversity of creative minds. So I invite you all to listen to each other and, to get inspired, to question yourself, your festival or your cultural venue and the work you are doing there, the choices you are making every day. The Atelier is a fragile space where you can share, learn, grow, and set stones for beautiful friendships and new collaborations.” You can read the full speech here.

Ms. Marta Keil, curator, dramaturg and researcher in Poland kicked off the Atelier Merano 2017 with a keynote speech, striking up 7 days of international cultural exchanges and intense discussions. In her speech, she elaborated in depth and from multiple perspectives the following question: 'who does the festival belong to.'

“From my point of view, the work of a curator is always, to an extent, a kind of balancing between: between artists and audiences, local and international context, the perspective of local authorities, institutional interests and one’s own intuition, and the struggle to remain consistent in one’s choices. Asked how to keep one’s footing on this extremely wobbly line, tugged at from all sides, I would be at a loss to answer.” You can read the full speech here.

The Atelier is a unique occasion for participants and presenters alike to step out of the daily routine for 7 days, and to dive in discussions on the artistic role of festivals and cultural organisations. The artistic aspects of festival management will be at heart of all the Atelier exchanges, but the Atelier is much more. It is also an exceptional opportunity for participants and presenters to network, to exchange ideas and to explore future cooperation possibilities. We invite you to take a look at the detailed 7-day programme here.

The Atelier will end on 23 November with a closing session at the Music School of Merano.

Latest news and more information on presenters and participants can be found at www.TheFestivalAcademy.eu and EFA’s blog Festival Bytes where Atelier participants will share some first-hand insights as well as on our Facebook and Twitter account. 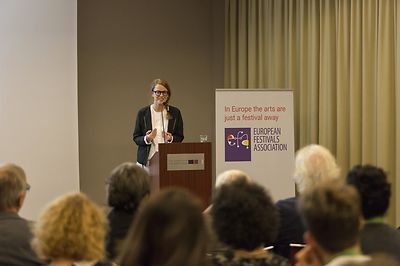