Lucerne Festival: 24 Million Swiss Francs in Annual Added Value for the Economy and Lucerne as a Tourist Destination

Lucerne Festival offers something attractive not only to lovers of classical music but also to the economy and public sector of the City and Canton of Lucerne. An annual value of around 22.6 million Swiss francs is added to the region’s economy by Lucerne Festival, as has been shown by a new study by the University of St. Gallen. The advertising value of coverage of the Festival by foreign media, which benefits Lucerne as a tourist destination, amounts to an additional 1.1 million Swiss francs.

“With our three festivals – in spring, summer, and fall – every year we show our close connection to classical music and to those who love it from around the world. But we are also closely connected to the people living in Lucerne and the region’s political life. For without their support, our commitment would not at all be possible,” said Hubert Achermann, Chairman of the Lucerne Festival Foundation, at a media orientation in which the study of the regional economic effects of Lucerne Festival was presented.

According to the study by the Institute for Systematic Management and Public Governance of the University of St. Gallen, the City and Canton of Lucerne benefit annually from Lucerne Festival by around 22.6 million Swiss francs. Of this amount, 21.4 million is accounted for by consumer spending, which flows into Lucerne’s economy, and 1.2 million by tax revenue into the public sector.

An additional amount of approximately 1.1 million Swiss francs can be estimated as the advertising value of coverage by the major foreign media, which benefits Lucerne as a destination for tourism.

In 2016, major media from the United States, Germany, England, Austria, and Italy such as The New York Times, The Guardian, Die Welt, the Frankfurter Allgemeine Zeitung, the television channel ORF, and La Stampa reported a total of 33 times on one of the three festivals run by Lucerne Festival.

Overall, reports on Lucerne Festival were carried in foreign media 541 times during the past year. More than 700 reports were published in Swiss media (including print, online, and electronic media).

Lucerne’s economy draws the greatest benefits from the more than 100,000 people who annually attend one of the three festivals, especially the world-famous Summer Festival. According to the study by the University of St. Gallen, their consumer spending amounts to around 11 million Swiss francs. Another nearly 8 million Swiss francs flows into the local economy from Lucerne Festival’s sponsors.

“Thanks to our generous sponsors and patrons, as well as our loyal guests, we are able to finance over 94% of our annual budget of 24.2 million Swiss francs (2015) on our own. But we also benefit from subsidies from the public sector totaling 1.4 million Swiss francs," says Michael Haefliger, Executive and Artistic Director and CEO of the Lucerne Festival Foundation. “It is therefore important for us to be able to show that that this investment in us is worthwhile for the Lucerne economy and for the City and Canton of Lucerne.”

Lucerne Festival recorded the highest level of economic benefit in 2008, when the Summer Festival lasted 40 instead of the current 33 days and accordingly attracted more guests who spent more money. “But in comparison to 2000, when we conducted our first study, the value of Lucerne Festival for the local economy has increased by a total of 4 million Swiss francs,” explains Roland Scherer, one of the two authors of the study.

Scherer is confident that this development will continue into the coming years. “So long as the general economic conditions do not seriously deteriorate and the financial support by the City and Canton is continued as well, the value of Lucerne Festival for the economy of Lucerne should continue to increase.”

Member of the Governing Council Reto Wyss: “A Cultural Beacon”

For member of the Governing Council Reto Wyss, head of the Department for Education and Culture of the Canton of Lucerne, Lucerne Festival is a “cultural beacon.” Wyss emphasized at the media conference that the Canton’s cultural support also includes the diverse independent scene and and culture of amateur artists.

“Together with the City of Lucerne, we will also make our contribution to ensuring that Lucerne Festival can retain its influence into the future as well,” said Wyss. “This I promise to you despite the strained financial situation and although certain other cantons are at present challenging the inter-cantonal sharing of the costs of supporting culture.” 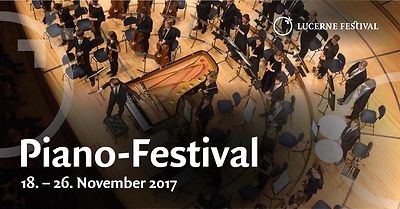