A Campaign on Olympic Mountains in Bosnia and Herzegovina

A Campaign on Olympic Mountains / Jahorina, Trebević, Igman and Bjelašnica / is a unique promotion of sports, cultural tourism, arts and education, taking place on Thursday 21 December 2017 in Sararjevo at the Skenderija square. The campaign is organised by the International Peace Centre, in cooperation with the Mountaineering Association and Ski Federation of Bosnia and Herzegovina, under the auspices of the State Commission for Cooperation with UNESCO.

The Organizing Committee invited all institutions of the entities, Brčko District, Cantons, municipalities and cities, municipal organizations, citizens and tourism associations, cultural and sports associations, schools, universities and media to join this project aimed at conquering the peaks of the Olympic mountains. These sports and recreational competitions contribute to the affirmation of the European Youth Olympics Festival  2019 which will take place in Sarajevo (9-19 February 2019).

Ibrahim Spahic, President of the IPC, expressed his satisfaction that many organizations and associations from BiH joined the campaign. He especially thanked the education, youth, sports, culture and science sectors of the Ministry of Civil Affairs of BiH and announced that 34 seedlings are planted on the 21 November, a month before the kick-off of the campaign. These plants symbolically recall the time passed from the 1984 Winter Olympics in Sarajevo and announce the 2018 Sarajevo Winter Festival under the motto "The Other Face of the World". 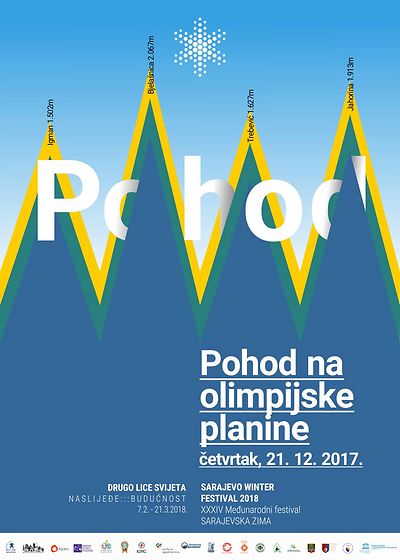