“[…] When working internationally, being rooted to the local is extremely important.”

The 12th Atelier for Young Festival Managers was closed in Merano, Italy, on the 23rd of November 2017 by Mr. Hermann Schnitzer, President Meraner Musikwochen / Settimane Musicali Meranesi, Vice-President European Festivals Association and host of the Atelier Merano 2017, Ms Inge Ceustermans, Managing Director of The Festival Academy, Mr. Hugo de Greef, Coordinator of the Atelier and Ms. Carolina Courbis and Mr. Martynas Levickis, both participants of the Atelier. This Atelier gathered 22 young festival managers from 14 countries and all continents, as well as 8 renowned festival directors from across the globe.

Participants were inspired by the experiences of the experts, gathered new ideas, inspiration and new ways of seeing things and above all made new friends. Several topics were addressed, with a special focus on censorship, audiences, curating, resources, politics, ecology, accessibility, identity, team building and sustainability to name only a few. The Atelier has planted many seeds to sparkle the thinking process and imagination of both participants and presenters.

One of the participants, Carolina Courbis, paraphrased one of those seeds with the following words during her closing speech: “I […] found the local approach that we had to the city of Merano totally brilliant. Listening to the Mayor, having guided tours in the museum, the castle, the theatre and getting to know the stories about the city showed us how important is to engage in a local way to the place we are visiting. As we have discussed these days, this is essential for festival producing, and as Rose [Fenton] said in her presentation, when working internationally, being rooted to the local is extremely important. I also really appreciate the tremendous value of having a space to share questions with no prejudice or expected answers. And even though we agree that perhaps we are going back home with even more questions that with the ones we arrived with to the Atelier, I’m sure we’ve gained invaluable new knowledge, but not just that, we have also gained an amazing bunch of new friends literally from all over the world.” (You can read the full speech here).

As one of the crucial aspects of the Atelier is to connect the issues elaborated in the sessions to a concrete local cultural situation, a thorough cultural programme was an integral part of the Atelier schedule. The group visited a variety of local cultural places, ranging from historical places to contemporary art museums, including the Palais Mamming Museum, Castle Tirol, Bolzano’s Museum of Archaeology, Museion, Merano’s Kellertheater and city theatre, where participants had the chance to hear the concert “Harpfully” with the Trio Nartan (harp) & Andrea Polato (percussion) & Marco Stagni (double bass). During their visit to the Museion, Museum of Contemporary Art, participants met with guest speakers linked to the local art scene of Bolzano such as Ms. Letizia Ragaglia, Museum Director and Dr. Klaus Widmann, President and artistic director of Südtirol Jazz Festival.

As in previous Ateliers, the Atelier Merano is only the beginning of a new network. Participants become part of The Festival Academy’s ever-growing Alumni Network, counting now 516 alumni from almost 70 different countries and some 50 mentors and presenters, which will help them in their future collaborations and work.

The Merano Atelier is paving the way for upcoming editions of the Atelier for Young Festival Managers. Indeed, we are already looking forward to the next editions, which will take place in March 2018 in the city of Johannesburg and the Atelier Gothenburg, which will take place in August 2018. The call for applications for the latter will be launched in the coming days.

In order not to miss anything from the Atelier Merano 2017, check out these links: 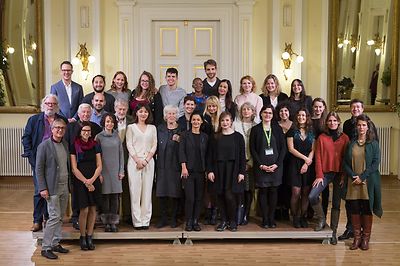