The Mérida International Classical Theatre Festival launched its 2018 for the first time in the heart of Europe on 24 May at the Instituto Cervantes in Brussels. Festival Director, Jesús Cimarro, highlighted the importance of internationalizing the festival in what was his first presentation in Central Europe. "We have come to Brussels in our search for new audiences, we want you to feel the excitement of enjoying classical theater on a summer night in the Roman Theater of Mérida."

EFA Secretary General, Kathrin Deventer, praised in her speech "the cultural heritage jewel that Mérida has with its theater and programme" and expressed EFA's readiness to "devote all possible efforts to transfer the message of the festival internationally". In addition, she praised the mixed financing model, with both public and private funds, that shows the way forward for other European festivals.

This festival, the longest in Spain and one of the oldest in Europe in the field of Greco-Roman theater, will be held in Mérida between June 29 and August 26 and will feature eight theater shows, one dance performance and parallel activities targeted at young audiences.

"We have a large loyal audience built up in the past fifty years, but in recent years we have been working to bring our programme closer to the young public and we have managed to lower the average age of the participants by fifteen years," explained Cimarro. In this period, the number of spectators has increased from 52,000 to 168,000 and a lot of effort is put in a campaign to make the festival visible internationally.

Also artistically the festival commits to have first-rate artists each year - this year, among others, El Brujo, Diana Palazón, Agustín Jiménez and Richard Collins - and present world premieres, from adaptations of novels to unpublished texts written by contemporary authors. "All this in the attempt to combine the classic with the contemporary ", according to Cimarro.

The Minister of Culture and Equality of the Board, Leire Iglesias, stressed the double commitment of the festival both towards the local and the European. He also expressed the strong link between the cultural heritage of the Extremadura region and the festival, this gives the festival a unique identity and transforms it into the only Greco-Roman that is celebrated in four archaeological sites: Mérida, Medellín, Regina and Cáparra. A link that he described as "union of the material, the immaterial and the emotional," through culture.

The mayor of Mérida, Antonio Rodríguez Osuna, said that it is "a pride for the city" to have this event in his city. He expresses his hopes that "it will soon be declared Intangible Heritage of Humanity by UNESCO, in the same way that Mérida is a World Heritage Site".

Finally, the ambassador of Spain in Belgium, Cecilia Yuste, stressed the importance of internationalizing the festival, especially during the European Year of Cultural Heritage and affirmed the values ​​that we all have to defend as Europeans.

The presentation was concluded with a performance by the actor Fernando Ramos, who interpreted a monologue of Viriato's work that was presented during the 2017 edition.

Find out more about this year's festival on their website. 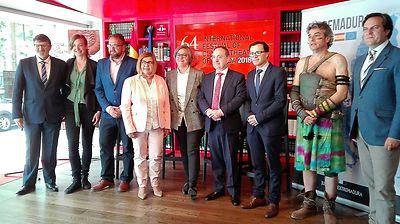