Lucerne/Zurich, 4 June 2018. Lucerne Festival kicks off this year’s Summer Festival, which officially opens on 17 August, with “Superar Suisse & Friends,” an orchestra camp running from 13 to  18 August. In keeping with the Festival theme of “Childhood,” this large-scale project will enable 130 children and teenagers from 11 to 17 years of age to prepare a symphonic program, which they will then present on 18 August in the KKL Luzern Concert Hall. These young people come from Switzer­land as well as from such international partner programs as Sistema Portugal, Sistema Lombardia, and Superar Wien. The orchestra camp at Lucerne Festival, which has initially been designed to run for a three-year term, will promote the joy of making music together in the sense of the founder of Venezuela’s El Sistema, José Antonio Abreu, which enables young people to rise above themselves and to acquire a sense of responsibility for their immediate and wider environment.

This orchestral community will be led by the conductor and El Sistema co-founder Ulysses Ascanio and 24 tutors. Meetings with musicians of the Lucerne Festival Orchestra, who will be rehearsing in parallel for the opening week of the Summer Festival, are also planned. During their daily rehearsals in individual instrumental groups and in the large orchestra, as well as during leisure activities, these young people can get to know each other and develop friendships.

Superar Suisse is a high-quality musical program that has been supporting children and adolescents since 2012 regardless of their background or financial resources. The program is free of charge and offers classes in choral singing and orchestral playing. Instruction take place exclusively within the group. In addition to regular lessons, international concerts and workshops complement the extensive range of Superar Suisse. A total of more than 500 children in Switzerland are being supported by Superar Suisse.

The Hilti Foundation, which is making it possible to offer the orchestra camp over a period of three years, has been consistently involved in the focal area of “social change through music” for more than a decade. It has moreover set itself the goal of bridging the gap between the established music world and El Sistema-oriented initiatives and the teaching methods associated with the latter. 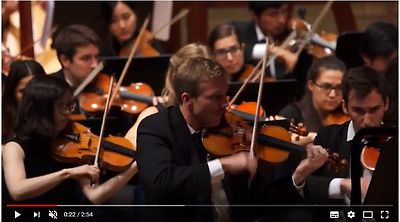