47 days of the best Croatian and European music, dance and theater in Dubrovnik

The largest and oldest Croatian festival – Dubrovnik Summer Festival opens on 10 July 2018. In 47 summer days, on various site-specific locations - on historical venues, in parks, palaces, churches and fortresses, almost 2000 artists from across the globe will perform more than 80 theatre, music, dance, folklore and other programs in front of large international audience.

The 69th festival edition presents diverse dance programme: Belgian dance company Rosas with their famous production A Love Supreme, ballet produced by the National Theatre of Split - Death and the Dervish in the choreography of Igor Kirov, Bitef Dance Company's performance of Macbeth and Title by Clément Layes.

Music programme includes some of the world's greatest artists, such as Mischa Maisky who will perform with the Zagreb Philharmonic and pianist Daniil Trifonov who will have a recital in Rector's Palace Atrium which will be his first Croatian appearance. This musical stage will also host the Schumann Quartet, countertenor Andreas Scholl and Ensemble 1700, as well as the Croatian pianist and Busoni Competition laureate Ivan Krpan, also clarinettist Andreas Ottensamer accompanied by José Gallardo,  just to name a few. Mozart’s Grand Mass will be performed in the Franciscan Church by Dubrovnik Symphony Orchestra conducted by Maxim Emelyanychev and with the Oratory Choir of St Mark's Church, soloists Leon Košavić, Ivana Lazar, Marija Kuhar Šoša and Krešimir Špicer. On 25 August Festival will be closed with the concert in front of St Blaise's church on which will perform organist Cameron Carpenter alongside the Croatian Radio and Television Symphony Orchestra. Musical off programmes include performance of American jazz diva Dee Dee Bridgewater with Croatian Radio and Television Jazz Orchestra and performance of French duo – accordionist Vincent Peirani and saxophonist Emile Parisien in Vala Beach Club, among others.

Theatre programme brings premiere performances of Michelangelo Buonarroti by Miroslav Krleža on the Island of Lokrum in coproduction with Croatian National Theatre of Rijeka and directed by Sebastijan Horvat; an ode to Mediterranean Under the balconies by Ranko Marinković and directed by Dario Harjaček and Countdown – at the wedding in collaboration with Zagreb Academy of Dramatic Art on Minčeta Fort. Guest theatre performances are last year’s most praised plays in Croatia – Black Mother Earth produced by the Zagreb Youth Theatre, Men of Wax by Croatian National Theatre of Zagreb and awarded production of Chekhov's Uncle Vanja by Russian Voronezh Chamber Theatre. All theatre performances are subtitled in English.

Furthermore the festival also organises two international master classes and one workshop for young musicians, by violinist Stefan Milenković, tenor Krešimir Špicer and pianist Maria João Pires respectively. This is a result of the new artistic leadership’s mission that emphasizes the educational dimension of the Festival. The programmes will be carried out in cooperation with the Caboga Stiftung foundation and Luka Sorkočević Art School, where classes will be held, while final concerts will take place at the Bunić-Kaboga Summer Villa and Rector’s Palace Atrium. 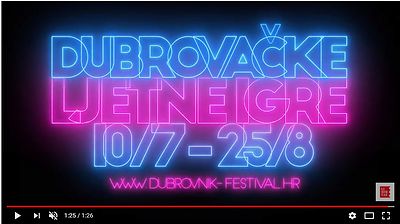