This year's 66th Ljubljana Festival runs from 28 June to 3 September and will once again feature ballet, opera and theatre performances, musicals, chamber and symphonic concerts, the International Fine Art Colony, workshops for children and young people, the Ljubljana Festival on the Ljubljanica, and much more. The opening of the Festival on 28 June will take place in Congress Square, as is now traditional, with the world premiere of Sfera Mundi – Voyage around the World. This musical and theatrical spectacular, directed by Carlus Padrissa, is a co-production of the Ljubljana Festival and La Fura dels Baus.

On 22 June, before the official start of the Festival, comes the premiere of the Slovene version of the musical Grease. The traditional Summer Night concert takes place on the eve of the first day of summer and June comes to an end with the concert Symphonic Ecstasy 2.  Highlights of this summer's Festival will include performances by top soloists and orchestras, with the return to Ljubljana of the Munich Philharmonic, a concert by the Filarmonica della Scala from Milan and a concert by Amsterdam's Royal Concertgebouw Orchestra to conclude the 66th edition of the Ljubljana Festival. Opera performances include concerts by sopranos Kristīne Opolais and Diana Damrau and tenor Marcelo Álvarez. Baritone Leo Nucci appears in the title role of Rigoletto, the Opera and Ballet of the Slovene National Theatre Maribor performs Wagner's Das Rheingold and the Sarajevo National Theatre offers us the opera Hasanaginica. For dance enthusiasts the programme includes the ballet Tchaikovsky. PRO et CONTRA by the Eifman Ballet of St Petersburg, a ballet triptych of modern dance pieces entitled Left Right, Left Right, the dance drama Dunhuang My Dreamland by China's Lanzhou Song and Dance Theatre, and a Slovene production called Dance Amore. A lighter musical atmosphere will be provided by the return of the musicals Vesna and Blossoms in Autumn, the traditional concert by Vlado Kreslin, a 20th anniversary concert by singer Nuša Derenda, and a performance by the virtuoso pianist Peter Bence. The drama Faust returns to the stage in memory of late director Tomaž Pandur. Finally, following the official closing of the 66th Ljubljana Festival, Laibach return to Križanke accompanied by the Lviv Philharmonic Orchestra.

Opening of the 66th Ljubljana Festival

Carlus Padrissa is one of the six artistic directors of acclaimed Catalan theatrical group La Fura dels Baus, who opened the 65th Ljubljana Festival with a spectacular staging of Carl Orff's scenic cantata Carmina Burana. This year he pays artistic homage to Magellan's 1519 expedition around the world. Sfera Mundi – Voyage Around the World, a production designed specially for Congress Square, tells the story of one of the first and greatest voyages of discovery in the history of humankind. (28 June)

Highly sought after soprano Kristīne Opolais will be accompanied at her Ljubljana concert of opera arias by the RTV Slovenia Symphony Orchestra under the Italian conductor Sesto Quatrini. (4 July)

In 2000 the librettist Nijaz Alispahić used the text of the ballad Hasanaginica as the basis for an eponymous three-act opera in collaboration with the Bosnian composer Asim Horozić. The main roles in this Sarajevo National Theatre production are sung by soprano Adema Pljevljak-Krehić and bass Leonardo Šarić. (5 July).

The performances of Siegfried and Götterdämmerung at last year's 65th Ljubljana Festival represented the completion of Wagner's famous Ring Cycle for the first time in this country. This year we welcome the Opera and Ballet of the Slovene National Theatre in Maribor to the Ljubljana stage with their production of Das Rheingold, which Wagner conceived as the prologue to his great cycle of music dramas. (10 July)

Soprano Diana Damrau offers a concert of opera arias together with her husband, the bass-baritone Nicolas Testé. The soloists will be accompanied by the Slovenian Philharmonic Orchestra under the Croatian conductor Ivan Repušić. (18 July)

Russian soloists accompanied by a choir from St Petersburg and the Mitteleuropa Orchestra offer a concert of opera arias. (27 July)

The opera company of Genoa's famous Teatro Carlo Felice are set to leave a lasting impression with their staging of Verdi's Rigoletto. The title role is sung by the celebrated Italian baritone Leo Nucci, who has appeared as Rigoletto more than 400 times. (27 and 29 August)

The Munich Philharmonic, founded in 1893, returns to Ljubljana after eight years. Appearing with the orchestra as soloist is the pianist Piotr Anderszewski. The conductor is Grammy award winner Paavo Jarvi. (1 July)

The Ljubljana International Orchestra and the Sarajevo Philharmonic Orchestra perform together under the baton of Živa Ploj Peršuh. (13 July)

Consisting of musicians from the orchestra of Milan's La Scala opera house, the Filarmonica della Scala was founded in 1982 by the conductor Claudio Abbado. The orchestra will be performing in Ljubljana under conductor Christoph Eschenbach. The soloist is the young piano virtuoso Jan Lisiecki, a musician whose remarkable maturity belies his youth. (30 August)

The concluding evening of the 66th Ljubljana Festival features the Royal Concertgebouw Orchestra from Amsterdam, considered one of the finest orchestras in the world. This will be the orchestra's third visit to the Ljubljana Festival and its second under the baton of current chief conductor Daniele Gatti. (3 September)

Clarinettist and composer Goran Bojčevski returns to the Ljubljana Festival with a project that links his Macedonian routes to the strict rules of classical music. (25 July)

The dance drama Dunhuang My Dreamland is performed by the Lanzhou Song and Dance Theatre. The drama tells the story of young painter Mo Gao, who journeys to Dunhuang to seek the greatest treasure of noble thought in art. (11 July)

A group of acclaimed Slovene dancers led by Jurij Batagelj have created a dance performance with a unique format. The dance story Dance Amore will thrill audiences with its stunning sets, glamorous costumes and rhythmic dancing. (16 July)

The Eifman Ballet of St Petersburg returns to Ljubljana, this time with the ballet Tchaikovsky. PRO et CONTRA, the fruit of years of reflection on the personal and creative world of the great Russian composer by choreographer Boris Eifman. (21 and 22 August)

Following the enormous success of the musical Mamma Mia!, which has thrilled audiences around the world, not least in Slovenia, fans of the genre now have the chance to enjoy the Slovene premiere of the musical Grease, originally created in 1971. (22, 23, 24 and 25 June)

After more than 150 performances, the first original Slovene musical Blossoms in Autumn continues to find new audiences and to delight those who return to see it for the second or third time. (23 July)

The programme of the 66th Ljubljana Festival sees the return of Vesna, a musical based on Slovene cinema's first romantic comedy. The musical is the work of the proven creative team that brought the hit musical Blossoms in Autumn to the stage three years ago. (24 August)

Relaxed evenings at the Ljubljana Festival

Along with musicals, another contribution to the relaxed atmosphere of the Ljubljana Festival comes with the Summer Night concert, organised in conjunction with RTV Slovenia. This time the concert will be dedicated to the national public broadcaster, which this year celebrates 90 years of radio broadcasting and 60 years of TV broadcasting. (20 June)

The Slovene composer, arranger, producer, multi-instrumentalist and conductor Rok Golob returns to Ljubljana with a new instalment of his "Symphonic Ecstasy" project. Symphonic Ecstasy 2 is a musical spectacle on the largest scale that will prove once again that music knows no boundaries. (30 June)

Following successful tours and sold-out performances, Goethe's Faust – directed by Tomaž Pandur returns to the stage of Križanke's summer theatre. The last act in the remarkable oeuvre of the late Slovene director, who died two years ago, is one of the most successful Slovene theatrical productions of all time, with more than 60 performances and at least 30,000 spectators. (3 July)

Having thrilled the audience at a sold-out concert in Cankarjev Dom's Gallus Hall in January, the internationally renowned Hungarian virtuoso pianist, composer and producer Peter Bence returns to Slovenia. (5 July)

The concert Balkan Fever places the spotlight on a trio of virtuoso musicians: kaval player Theodosii Spassov and guitarists Miroslav Tadić and Vlatko Stefanovski. Appearing as a guest on some arrangements of Slovene folk tunes is Slovene saxophonist Vasko Atanasovski. (9 July) are a group of friendly aliens from the planet Voca, where all communication is based on music and musical expression. Eight outstandingly talented singing comedians will take us on a musical journey with no musical accompaniment or sound effects. (19 July)

Voca People are a group of friendly aliens from the planet Voca, where all communication is based on music and musical expression. Eight outstandingly talented singing comedians will take us on a musical journey with no musical accompaniment or sound effects. (19 July)

Chamber orchestra I Solisti Aquilani entranced the audience at last year's 65th Ljubljana Festival with a performance alongside famous stage and screen actor John Malkovich. This year they are joined by the Brazilian composer, pianist and guitarist Egberto Gismonti. (28 August)

Slovene rock and folk music legend Vlado Kreslin continues his annual tradition and returns to the Ljubljana Festival for the 27th year. As always, he will be joined by an interesting selection of guests. (31 August)

To mark the 20th anniversary of her solo debut, Nuša Derenda has prepared a series of twenty concerts, including a music and dance spectacular in Križanke's summer theatre. (1 September)

Laibach return to the stage of Križanke's summer theatre, this time accompanied by the Lviv Philharmonic Orchestra, in a performance featuring elaborate visuals and lighting effects. The orchestra is conducted by the Flemish conductor Filip Rathé. (7 September)

The Ljubljana Festival on the Ljubljanica has now reached its third edition. The musical performances in this attractive setting will be provided by students from Ljubljana's Academy of Music and Conservatory of Music and Ballet, appearing in a variety of chamber ensembles. (29 June–2 July)

Children have the opportunity to develop their talents at free themed creative workshops: a dance workshop called Opposites (20–22 August) and a junior art colony (16–20 July).

Sculptor Janez Lenassi burst onto the Slovene art scene in 1960 when his monument to Edvard Rusjan was unveiled in Nova Gorica. Hommage à Janez Lenassi will be on view in Križevniška Church. (16 August–3 September)

This year's third edition of the Indigo festival is dedicated to rumours: a silent force that affects public opinion and behaviour, personal decisions and relations between people and communities. (5–7 September)

Ljubljana Festival is supported by the City of Ljubljana and its mayor Zoran Janković, without whose generous support it would not be possible to put on a festival programme lasting more than two months. We would also like to express our gratitude to all our sponsors and supporters. Thanks are also due to the media for their coverage of our events, and to all who attend the festival.

A 10% discount is available on tickets purchased in advance (until 31 May), increasing to 20% for Ljubljana Festival Club members. To become a member of the Club, visit www.ljubljanafestival.si, where you can also purchase tickets. Tickets are available from the Križanke box office, Eventim outlets, Petrol service stations, post offices, Kompas shops and railway ticket offices in Ljubljana, Celje, Koper and Maribor. 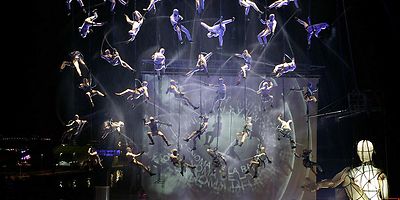