The “Music Festival with a spirit of adventure" celebrates 20 years in Sines, Portugal

FMM Sines - Festival Músicas do Mundo, the "music festival with a spirit of adventure", will be held between July 19 and 28, 2018 in its 20th year, in Porto Covo and Sines, Alentejo, Portugal.

Fifty-nine concerts are scheduled for this commemorative year, the biggest musical line-up ever, which will also feature a program of parallel initiatives in various areas of artistic expression.

The 2018 choice of performers was guided by our core principles: building bridges between cultures, promoting equality among artists, providing audiences with the opportunity to meet musicians with geographic origins or aesthetic proposals that have less space in the mainstream live music scene.

The first four days of music (July 19 to 22) take place in Largo Marquês de Pombal, in the village of Porto Covo, and the last six days (July 23 to 28) are in the historic centre of the city of Sines (Largo Poeta Bocage, Centro de Artes de Sines, medieval castle and marine promenade - Av. Vasco da Gama).

Only 22 concerts out of 59 concerts are paid admission, those held at the auditorium of the Centro das Artes and the night concerts in the Castle. The other 37 concerts, nearly 2/3 of the program, are free admission, including all the venues in Porto Covo and on Avenida Vasco da Gama and Largo Poeta Bocage. Free concerts are also available at the Castle in the late afternoon.

FMM Sines has been organised by the Municipal Council of Sines since 1999. In 2017, it was the recipient of the EFFE Award, awarded by the European Festivals Association to "six of the most influential European festivals", and the jury highlighted the role of this festival in promoting real diversity and for being a celebration of cosmopolitan art, life and spirit.

The FMM Sines 2018 journey begins in Portugal. From the festival’s host country, we will listen to fado (Aldina Duarte), electronic experimentations on traditional music (Live Low), a voice echoing South American sounds (Susana Travassos) and three representatives of the African Lisbon scene (Fogo Fogo, Sara Tavares, Scúru Fitchádu). A Lisbon with connections to Cape Verde, an archipelago that will bring a living legend (Bulimundo) to Sines and one of its emerging talents (Elida Almeida).

This will be a year full of enriching experiences in terms of music from the North of Africa, with musicians crossing the borders of the Maghreb (AMMAR 808, DuOud, Sofiane Saidi & Mazalda, ŸUMA), passing through the Sahara Desert (Imarhan) and arriving in metropolitan Cairo (Maryam Saleh, Maurice Louca & Tamer Abu Ghazaleh's Lekhfa).

The journey through sub-Saharan Africa begins in Mali, with a guitarist of noble lineage (Vieux Farka Touré) and a classic Afro-Cuban music crossover (Maravillas de Mali, with guest musician Mory Kanté). We then advance through the frafra music of Ghana (Guy One), the “tuku music“ of a Zimbabwean ambassador (Oliver Mtukudzi) and traditional Mozambican music (Timbila Muzimba).

African diaspora will also be present, via modern fusions of Ethio-jazz (Gili Yalo) and Nubian songs of return (Alsarah & The Nubatones).

From Brazil, we have one of the most impactful line-ups that the festival has ever received: two bands that are at the forefront of the new urban music that pays tribute to their roots (BaianaSystem, Cordel do Fogo Encantado) and two amazing songwriters with cutting-edge lyrics (Karina Buhr, Tulipa Ruiz).

Still in South America, we cover the underground scene of Colombia (Cero39, El Leopardo, Meridian Brothers) and make an incursion into its most genuine pop music (Carmelo Torres y Su Cumbia Sabanera). From neighbouring Venezuela, we received an exponent of the cuatro music (C4 Trio), and from Jamaica a reggae historic band makes its way to Sines (Inner Circle).

The US is featured on the festival with New York-based musicians sharing a cosmopolitan vision (Barbez, Moon Hooch) and black music artists from deep America’s South (Robert Finley, The Como Mamas).

We return to Europe from the United Kingdom, with an opening act that blends jazz, hip hop and Caribbean music (Sons of Kemet), an electro swing duo (The Correspondents) and a trumpeter that brings her Arab heritage to contemporary jazz (Yazz Ahmed).

Between Europe and Asia, we will listen to music born in the villages of Belarus (Ethno-Trio Troitsa) and the sounds of landscapes from the Russian republic of Tuva (Huun-Huur-Tu).

As music is at the core of this meeting, FMM Sines will also have projects that blend aesthetics and geographies. In 2018, audiences will be able to dance to the sound of a Senegalese mbalax band formed by a German producer (Mark Ernestus' Ndagga Rhythm Force), a fusion experience between Cuban and Jamaican rhythms (Havana meets Kingston) and a collaboration of French musicians with a Pakistani singer (Markus & Shahzad).

Finally, we receive artists whose approach to music is universal and without an accurate geographic identity, whether it is a wanderluster Parisian-born pianist (Chassol), an experimental rock band from Barcelona (Seward), a Franco-Swiss trio and an adventurous Slovenian instrumental music trio (La Tène, Širom) and a classical guitar duo that blends flamenco and metal in the streets of Melbourne (Opal Ocean). 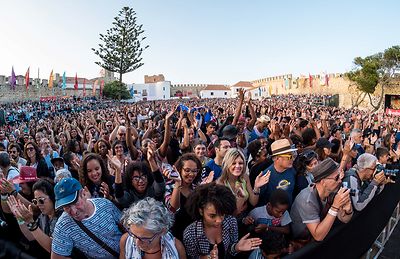