Beyond our blind spots

A reflection by Inge Ceustermans, Managing Director of The Festival Academy

In what follows, please allow me for a moment to give a here and there unnuanced perspective of our world of today.

Everyone is shocked and world leaders are condemning Trump’s zero tolerance policy regarding separating migrant children from their parents at the Mexican border. Even Melania is becoming melancholic and Trump signs an executive order to keep families together. Is the world a stage?

What about Theresa May, condemning too, and how the UK deals with splitting up families for years according to Satbir Singh, chief executive of the Joint Council for the Welfare of Immigrants who listing to the facts and numbers says ‘I cannot, in good faith, reassure myself with that time-old mantra that we are somehow more civilised and less cruel or brutal than our cousins across the pond. Nor do I think that condemnation from our government can carry any real currency as it has been carried out with a brutality and on a scale that would make even President Trump blush’. What about my own country? Is it always easier to look at the other side of the wall and criticise instead of looking into one’s own chest?

This August, we are going to Sweden, Gothenburg, with the next Atelier. At the peak of the refugee crisis in 2015, Sweden opened its doors and took in more migrants per capita than any other European country. A well off society welcoming those less fortunate while some other EU member states started building walls instead, treading the values of the European Union (and mine and yours) with their feet. Is there still hope? Are we a civilized bunch (or some of us at least) after all?

Sweden did its part. Compared to the number of refugees taken in by countries in the conflict area, the number the European Union welcomed, is just a drop in the ocean, but not for those of course amongst the happy few. Everyone that is helped and given a perspective of a better life, a future, is one that is helped.

Let us just dare to look from the inside once. As a consequence of a humane policy towards the refugee crises, Sweden is facing some tensions in its society today with a polarised debate about its immigration policy as a consequence. This challenge should not be an issue of Sweden’s society alone, and is again a responsibility on EU level to safeguard these principles and to stand united in defending these values against polarising voices generating fear of the other. Let’s help Sweden (and ourselves) move forward in a more ‘human’ direction!

It’s been a challenging year so far for The Festival Academy, opening up the Atelier to regions and festival managers less fortunate as well with a first edition in Africa and in the Global South, raising funds for those who cannot afford to pay the fee, believing in creating diversity, shifting perspectives, moving towards a global conversation. However small this organisation be, the dream is big. Too big? It cannot be too big!

We made a large step, now to continue with small steps, 2% a day towards the change envisioned and sometimes 1% back. Development needs time, lots of it; it’s continuous. And sometimes we don’t have time, and do not take it; like for ecological challenges, or for people drowning in front of Fortress Europe.

How to keep hope and stay motivated to do what you do, to make your festivals, to choose the artists you work with, to defend them and create a safe place for them to risk, to involve your communities, to think about the travel and your ecological footstep your programme entails, to think about your responsibilities related to society debates as the #metoo movement or generally the role of woman today (still? sigh, yes still)…

Part of it, I think, lies in human connections, not all maybe, but it plays an important role in it. Two years ago I read an article in The Guardian Reasons to be cheerful: how putting other people first will make you happy. Struggling with motivation? Then stop being so selfish by Dan Ariely a researcher on behavioural economics who writes: ‘…human motivation is actually based on a time scale that is long, sometimes even longer than our lifetimes. We’re motivated by meaning and connection because their effects extend beyond ourselves, beyond our social circle and maybe even beyond our existence. We care deeply about meaning, we care about it more as we become aware of our own mortality – and if we have to go to hell and back in the search for meaning and connection, we will, and we will get deep satisfaction along the way’.

I’m more than happy that festival managers coming from different parts of the globe including refugee artists and managers residing in Swedish ICORN cities are part of the Gothenburg Atelier for Young Festival Managers and that we have collaborations with Arts Councils and cultural institutes worldwide supporting participants and creating opportunities for those who would not be able to join otherwise; like our recently launched partnership with the Arab Fund for Arts and Culture.

Together with The Festival Academy team and Mike van Graan (President of the African Cultural  Policy Network) who has designed the programme of this Atelier with us and will be facilitating it, I’m looking forward to meeting a group of passionate festival makers coming from all over the world soon in Gothenburg to search for meaning and connection and to help each other go beyond our blind spots by sharing and valuing different perspectives and being open, by daring to be fragile and to challenge our own positions and to risk having a dangerous conversation. Have a look at our diverse group of speakers and look out for the programme to be announced soon. To all those less fortunate who did not make it this time, let’s try together for one of the next activities of The Festival Academy (applications are still open for the Atelier Valletta 2019 and for the Festival Production Management Training). We go on and on and on.

You may wonder, does a festival or festival manager need to be loaded with all the worlds’ responsibilities? No, I don’t think so, they should be about art and the artist in the first place,  fun also, and festive, but connected to the world we live in and at least be aware about who you share this feast with and who might not have access to it.


Find out more about The Festival Academy and its trainings on: www.thefestivalacademy.eu 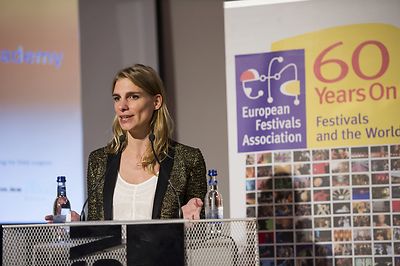