Before the First World War, Russian citizens and noble families could take a direct train from St. Petersburg all the way to Merano. On 22nd August, the concert by St. Petersburg’s Mariinsky Orchestra will take up this historic liaison and open this year’s südtirol festival merano . meran. In Meran, the prominent ensemble under the direction of Valery Gergiev plays in one of the most beautiful concert halls in the Alpine region, thus confirming the exclusive position of this premium festival. Its concert series classic, baroque, colours of music, matinée classique, vox humana and young artists portrait represent highlights of the European classic landscape.

This year the festiva “Meran Music Weeks” changed its name into südtirol festival merano . meran, which is valid in all languages. After all, this great music festival not only represents the city of Merano, but the whole country. By the way: The new concert format "young artists portrait" proves the constant expansion of content and geography of the festival: Young musicians present themselves at new venues (Castle Katzenzungen, Prissian; Parish church, Partcines; Castle Baslan, Tscherms) with different programs and meet after the concerts with the audience. With three concerts and a tour de force through the string quartet literature from Bach, Schubert, Beethoven and Mendelssohn to Shostakovich's "ideologically reprehensible" quartet op. 110, the award-winning Aris Quartet opens this series.

The südtirol festival merano . meran will be opened - as in previous years - with three free open air concert films at Piazza Terme. Again there is a novelty: On 17 August, this pre.festival presents the first film production produced in Merano of the opening concert 2017 with the Baltic Sea Philharmonic under the direction of Kristjan Järvi. On the screen there are also the soloists Martha Argerich and Lisa Batiashvili, who will visit the festival city of Meran this fall - as well as the Baltic Sea Philharmonic. From August 22nd to September 21st, the südtirol festival merano . meran will offer 23 top concerts. Music fans have seven subscription series to choose from, including the subscription under 40 with seven concerts from all festival series.

At the center of the concert calendar is the symphonic program (classic): In the Kursaal, the LGT Young Soloists - supremely gifted artists aged from 12 to 23 years - play rarely heard music, such as the Carmen Fantasy by the Hollywood composer Franz Waxman or the virtuoso pieces by the three star cellists Giovanni Sollima, Giovanni Bottesini and David Popper. The Budapest Festival Orchestra, led by Ivan Fischer, will be performing with three soloists, presenting music by Brahms and Liszt as folk music. The Staatskapelle Dresden under Alan Gilbert, who was chief conductor of the New York Philharmonic Orchestra from 2009 to 2017 and from 2019 will take over the Elbphilharmonie Orchestra in Hamburg, interprets with the exceptional violinist Lisa Batiashvili Prokofiev's 2nd Violin Concerto and the countertenor Philippe Jaroussky visited with arias and duets from Handel operas, the colourful dream factory of baroque music theatre. Martha Argerich fills the sound space of Franz Liszt's Piano Concerto with her interpretation before the Youth Orchestra of Bahia from Brazil translates into the "New World" with spirited music by Bernstein, Gershwin or Marquez. The Baltic Sea Philharmonic directed by Kristjan Järvi, celebrates the independence of the Baltic States with musical surveying in several Baltic regions with the Norwegian violinist Mari Samuelsen and the Philharmonia Orchestra London under Esa-Pekka Salonen completes the classic series with Bruckner's 7th Symphony.

The other concert series are also outstanding. An example of this is the night concert with the legendary Brazilian multi-instrumentalist Egberto Gismonti, who in five decades created a soundscape in which Stravinsky or Bach as well as Miles Davis and the dance rituals of the Xingu Indians have their place. In the bel étage of the Palais Mamming Museum the "Queen of the Baroque flute", Dorothee Oberlinger, plays "Celtic" Baroque music and in the parish church of Niederlana the English A Cappella Choir Tenebrae follows the traces of Renaissance polyphony in the romantic vocal music. In the Kursaal the Ensemble Salut Salon starts a musical flight of love and the Danish String Quartet in the Pavillon des Fleurs combines Viennese classical music with an exciting expedition through the universe of Scandinavian folk music.

On August 22nd, the Mariinsky Orchestra plays Debussy's Impressionist "Prélude à l'après midi d'un faune", with which the music gained a new lease of life at the end of the 19th century. The Philharmonia Orchestra London performs Schoenberg's "Verklärte Nacht" that combines tradition and innovation, and that fits very well with the südtirol festival merano. meran, which looks ahead - and has reinvented itself for more than three decades.

More programme information and tickets can be found here. 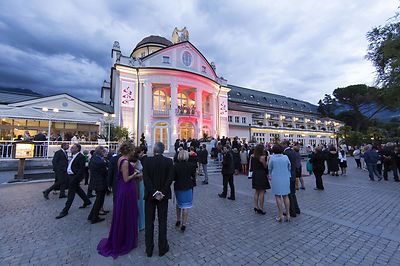