Ljubljana Festival kicks off another month of festivities

The 66th Ljubljana Festival (under the patronage of the Mayor of the City of Ljubljana, Mr Zoran Janković) is going into its second half with a cycle of chamber concerts that will enrich evenings in the Knights' Hall at Križanke. Numerous acclaimed musicians from Slovenia and abroad will appear with the Slovene Philharmonic String Chamber Orchestra. The programme also includes two evenings of piano music in the company of pianists Vladimir Mlinarić and Alexander Gadjiev. Art lovers will certainly appreciate the opening of an exhibition dedicated to the sculptor Janez Lenassi, while the youngest visitors can take part in two different dance workshops in August: Opposites and Committed to Steps. The Eifman Ballet of St Petersburg, which closed the 64th Ljubljana Festival two years ago, returns to Ljubljana on 22 August with a new production. The following evening will be dedicated to a concert of opera arias sung by the tenor Marcelo Álvarez. On 24 August the musical Vesna returns to the Ljubljana Festival, followed on 27 and 29 August by two performances of Verdi's Rigoletto by the Teatro Carlo Felice from Genoa. On 28 August I Solisti Aquilani will appear alongside Brazilian guitarist Egberto Gismonti, whose music masterfully interweaves elements of Brazilian folk music and the classical tradition. Milan's Filarmonica della Scala orchestra, conducted by Christoph Eschenbach, appears on 30 August with pianist Jan Lisiecki. Highlights of the end of August and beginning of September include the traditional concert by Vlado Kreslin and a concert marking 20 years of the solo career of singer Nuša Derenda. On 3 September this year's 66th Ljubljana Festival will be brought to a glorious close by the Royal Concertgebouw Orchestra conducted by Daniele Gatti.

The final days of the festival include a number of other notable events: the Slovenian Philharmonic Orchestra conducted by Marko Letonja, a concert by the one and only Laibach together with the Lviv Philharmonic Orchestra, and a performance of Goethe's Faust directed by Tomaž Pandur, originally scheduled for July but postponed as a result of illness among the cast.

The programme of the 66th Ljubljana Festival also includes two evenings of piano music. The first features pianist Vladimir Mlinarić, whom critics have described as a refined interpreter, with works by Wolfgang Amadeus Mozart and Matti Rautio.

Pianist Alexander Gadjiev began piano lessons with his mother before continuing his training with his father, the acclaimed Russian pianist Siavush Gadjiev. He made his orchestral debut at the age of nine and gave his first piano recital a year later.
He will be performing works by F. Chopin, P. I. Tchaikovsky and S. Prokofiev.
(8 August at 8.00 p.m., Slovenian Philharmonic Hall)

Sculptor Janez Lenassi burst onto the Slovene art scene in 1960 when his monument to Edvard Rusjan was unveiled in Nova Gorica. The exhibited works – Balance, 1973, granite; Family, 1977, marble; Sequence, 1998, marble – and others that express his remarkable sensitivity to the expressive characteristics of the material in which he worked reveal to us merely a small part of his intimate, deeply felt spiritual dimension. Hommage à Janez Lenassi will be on view in Križanke's timeless Knights' Hall. The exhibition is curated by Nelida Nemec.
(20 August to 3 September / Exhibition opening: (20 August at 8.00 p.m., Križanke)

The youngest visitors to the festival will have the opportunity to take part in the free dance workshop Opposites, led by Karin Putrih, featuring a thoughtful combination of the basics of ballet and modern dance. Participants will use the medium of dance to try and express their unique personality.
(20–22 August, 12.00–2.00 p.m., Knights' Hall, Križanke)

A special movement workshop called Committed to Steps will also be run for children aged between 6 and 14. Awakening through time – from birth until later life – is the theme of this year's dance spectacle, to be created by Festival Ljubljana in collaboration with URI Soča and the project's general sponsor Zavarovalnica Sava.
(20–28 August, 9.00–11.00 a.m. – workshops; 28 August at 6.00 p.m. – final performance)

Dance and ballet fans will be delighted to see that the programme of this year's Ljubljana Festival includes the return of St Petersburg's Boris Eifman Ballet, this time with the ballet Tchaikovsky. PRO et CONTRA, the fruit of years of reflection on the personal and creative world of the great Russian composer by choreographer Boris Eifman. "I have been returning to Tchaikovsky's music for years. I have realised how deep and, in fact, bottomless his compositional world really was. I have come to an understanding of various themes connected to his creative life, his psychological identity and his personal relationships. None of this had ever been explored to this extent. I wanted to create a work that submerged itself more deeply in his creative environment," says Eifman.
(21 and 22 August at 8.00 p.m., Cankarjev Dom)

The following evening it will be possible to hear the Argentine tenor Marcelo Álvarez, considered one of the most important singers of his generation. He will be accompanied in a concert of opera arias by the Zagreb Philharmonic Orchestra conducted by Constantine Orbelian. He has worked with numerous renowned conductors, including James Levine, Zubin Mehta, Claudio Abbado, Riccardo Muti, Riccardo Chailly and Antonio Pappano. He made his international debut in 1995 with the role of Elvino in Bellini's La Sonnambula at the Teatro La Fenice in Venice. Since then, his career has taken him to opera houses around the world.
(23 August at 8.00 p.m., Cankarjev Dom)

The Slovene musical Vesna, adapted from Slovene cinema's first romantic comedy, written by Matej Bor, returns to Križanke following last year's premiere. The new musical is the work of the proven creative team that brought the hit musical Blossoms in Autumn to the stage four years ago. This story of innocent young love and its trials is directed by Vojko Anzeljc, with a libretto by Janez Usenik, choreography by Miha Krušič and music by Matjaž Vlašič. The producer is Gorazd Slak. The main roles of Vesna and Samo are played by Flora Ema Lotrič and Robert Korošec.
(24 August at 8.30 p.m., Križanke)

The opera company of Genoa's famous Teatro Carlo Felice are set to leave a lasting impression with their staging of Verdi's Rigoletto. Today Rigoletto is a staple of the operatic repertoire. It received its first Slovene performance in Ljubljana on 19 November 1896. The opera is perhaps most notable for the Duke's cynical aria "La donna è mobile", an eminently hummable tune that would become very popular among the gondoliers of Venice. The title role of the thoughtless court jester Rigoletto is sung by the celebrated Italian baritone Leo Nucci, a famous Verdi interpreter who has appeared more than 400 times in the role of Rigoletto alone.
(27 and 29 August at 8.00 p.m., Cankarjev Dom)

Chamber orchestra I Solisti Aquilani entranced the audience at last year's 65th Ljubljana Festival with a performance alongside famous stage and screen actor John Malkovich. This year they are joined by the Brazilian composer, pianist and guitarist Egberto Gismonti, whose music masterfully interweaves elements of Brazilian folk music and the classical tradition, in an approach that reflects that of his fellow countryman Heitor Villa-Lobos. On this occasion the orchestra will be directed by the Argentine conductor Luis Gorelik.
(28 August at 8.00 p.m., Slovenian Philharmonic Hall)

Consisting of musicians from the orchestra of Milan's La Scala opera house, the Filarmonica della Scala was founded in 1982 by the conductor Claudio Abbado. An orchestra with a rich history, it has given more than 800 international concerts over the last 35 years, with important milestones including visits to the United States of America with Riccardo Chailly and to China with Myung-Whun Chung. The orchestra will be performing in Ljubljana under the baton of the great German conductor Christoph Eschenbach. The soloist is the young piano virtuoso Jan Lisiecki, a musician whose remarkable maturity belies his youth.
(30 August at 8.00 p.m., Cankarjev Dom)

The traditional concert by Vlado Kreslin, which fills the Summer Theatre of Plečnik's Križanke complex year after year, has now reached its twenty-seventh edition. Kreslin, who worked with the rock band Horizont in the 1980s, triumphed at the 1980 Slovene Song Festival with "Dan neskončnih sanj" ("Day of Endless Dreams") and created a number of classic compositions with the band Martin Krpan, is one of the best known Slovene artists in any genre. His remarkable musical understanding, of folk music in particular, has caused something of a renaissance, notably through his work with Beltinška Banda and numerous collaborations, while his personal approach has brought the genre closer to different generations, both locally and internationally. Accompanied by a diverse range of guests, Vlado Kreslin will perform a selection of songs from his extensive repertoire.
(31 August at 8.30 p.m., Križanke)

To mark the 20th anniversary of her solo debut, Nuša Derenda has prepared a series of twenty concerts, including a music and dance spectacular in Križanke's summer theatre. She will take us on a fascinating musical journey spanning her earliest beginnings, her biggest hits and a variety of genres, and together with her musical friends will offer sensuous interpretations of hits that are familiar to everyone. She will be joined onstage by her backing group, in a specially expanded line-up, a range of musical guests, and dancers.
(1 September at 8.30 p.m., Križanke)

The concluding evening of the 66th Ljubljana Festival features the Royal Concertgebouw Orchestra from Amsterdam, considered one of the finest orchestras in the world. Critics describe its sound as unique and balanced. Its string section has been called "velvety", the sound of its brass is "golden", the timbre of the woodwinds is "distinctly personal" and the percussion section has an international reputation. In addition to its many concerts at the Concertgebouw, the orchestra gives numerous concerts in major concert halls around the world, thus reaching some 250,000 concertgoers every year. This will be the orchestra's third visit to the Ljubljana Festival and its second under the baton of current chief conductor Daniele Gatti.
(3 September at 8.00 p.m., Cankarjev Dom)

The Slovenian Philharmonic Orchestra, which proudly takes its place alongside the world's oldest symphony orchestras, has confirmed its excellence through numerous performances around the world. The orchestra will be conducted by its former music director Marko Letonja, currently music director of the Strasbourg Philharmonic Orchestra, who is due to take up the position of chief conductor of the Bremer Philharmoniker at the start of the coming season. The programme consists of works by R. Strauss, G. Ligeti and H. Berlioz.
(6 September at 8.00 p.m., Cankarjev Dom)

Laibach return to the stage of Križanke's summer theatre, this time accompanied by the Lviv Philharmonic Orchestra, in a performance featuring elaborate visuals and lighting effects. The orchestra is conducted by the Flemish conductor Filip Rathé. At the prompting of the Warsaw-based Adam Mickiewicz Institute, in the context of the international cultural programme Polska 100, marking the centenary of Poland's independence, the group has prepared a unique interpretation of Polish composer Andrzej Panufnik's third symphony, known as the Sinfonia Sacra. The programme also includes an adaptation of Laibach's original music for the Anton Podbevšek Theatre's production of Also Sprach Zarathustra, directed by Matjaž Berger. Laibach's interpretation is not based on Strauss's music but on an entirely original musical reading.
(7 September at 8.30 p.m., Križanke)

Following successful tours and sold-out performances in China, Mexico, South Korea, Colombia, Spain and other countries, Goethe's Faust – directed by Tomaž Pandur and premiered as a co-production of SNG Drama Ljubljana and the 63rd Ljubljana Festival – returns to the Ljubljana Festival. The last act in the remarkable oeuvre of the late Slovene director and theatrical wizard, whose rich career – tragically cut short by his premature death two years ago – saw him direct plays all over the world and, together with his sister and closest collaborator Livija Pandur, significantly influence perceptions of theatre in the international context, is one of the most successful Slovene theatrical productions of all time, with more than 60 performances and at least 30,000 spectators.
(10 September at 9 p.m., Drama Theatre)

This year's third edition of the Indigo festival is dedicated to rumours: a silent force that affects public opinion and behaviour, personal decisions and relations between people and communities.
(5–7 September, French Revolution Square and the surrounding streets) 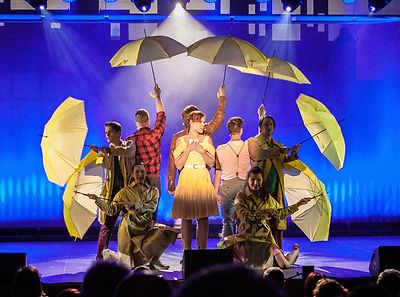