The 70th anniversary of the Festival d'Aix-en-Provence, which finished on 24th July with the closing performance of The Magic Flute by Mozart in the famous staging by Simon McBurney, was also the last edition under the leadership of Bernard Foccroulle.

This edition welcomed over 86,000 spectators at 6 operas, including two world premieres, 8 concerts, 4 professional meetings (Accord Majeur, Culture Num, Rencontres Medinea and enoa Board Meeting), 42 concerts, meetings and master classes of the Academy and 57 events during the Aix en juin prelude, which welcomed almost 17,000 spectators.

Like every year, the Festival was widely broadcast in media and on the web. Thus, all opera productions at the Festival were filmed and broadcast on radio, television or internet (Arte, Arte Concert, CultureBox, France Musique, France Télévisions, Operavision.eu).
Ariadne auf Naxos and Dido and Aeneas were projected on large screens in 24 towns in the Provence-Alpes-Côte d'Azur region and all 2018 productions were or will be broadcast in France and worldwide.
The concert of the Mediterranean Youth Orchestra on 22nd July was also broadcast live on the festival’s Youtube channel.

Read here the full report on the 2018 festival. 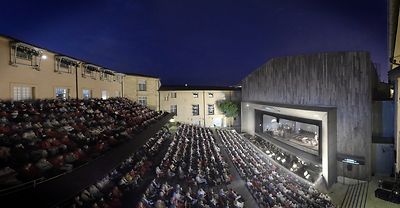