GOLDEN TOWER FOR THE BEST FILM goes to film GIRL, by Lucas Dhont realized as Belgian-French coproduction. “This film was the most accomplished and powerful piece in the competition, which treated a difficult topic not only with sincerity and complexity but also with real depth and without any stereotypes. It touched and moved us on many levels.”

PALIĆ TOWER FOR BEST DIRECTOR goes to Rasmus Kloster Bro for direction of Danish film CUTTERHEAD. “For an outstanding achievement in all the fields director is responsible for: a brilliant script, directing of actors, editing, visual concept. He chose a well-known and seemingly easy genre, only professionals realize how extremely hard it is to deal with.”

The Jury decided to assign Special Mention to Spanish film CARMEN & LOLA directed by Arantxa Echevarría. “For bold first film, for a truthful, tender and authentic depiction of a culture; for well leading mostly nonprofessional actors through this risky and difficult adventure; for the whole cast, their braveness and their excellent performances.”

THE BEST FILM AWARD goes to Hungarian film BLOSSOM VALEY by Laszlo Csuja. “A poignant first feature depicting how contemporary misfits crave for love and struggle for survival, within an alienating society.”

FIPRESCI AWARD FOR THE BEST FILM goes to French film AT WAR by Stéphane Brizé. “For the masterful and thrilling way in which the director transfigures the social battlefield into a unique cinematic experience and for the outstanding performance by Vincent Lindon.” 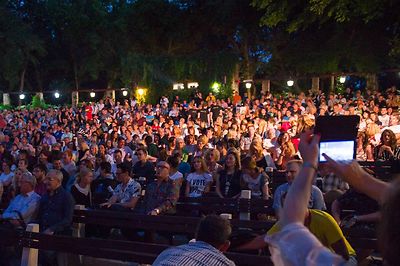