This article was written by one of the mentors of the upcoming Atelier Gothenburg: Hjalmar Jorge Joffre-Eichhorn, Theatre activist, co-founder Afghanistan Human Rights and Democracy Organization (AHRDO), Theatre of the Oppressed and Playback Theatre - Germany/Bolivia/Afghanistan, following the attack on a local educational centre in Kabul on 15 August.

NOBODY IS WAITING FOR GODOT: ARTS-ACTIVISM IN AFGHANISTAN

The H.E.A.T. Collective was founded by Artistic Director Jessica Litwak to create, advocate and inspire artistic expression rooted in healing, education, activism, and theatre. We work to build collectives in every context: in our performances, workshops and community events. Engaging artists across the world, we aim for powerful bridge building art of courageous generosity. In this series, guest experts will write a piece representing each letter of H.E.A.T. - week one will be healing, week two is education, week three is activism, and the last week of the month is theatre. Together these pieces will highlight the work that is being done across all aspects of The H.E.A.T. Collective in the hopes that we can ignite dialogue, spark further exploration, and encourage more people to get involved.

Among the infinite possibilities of envisaging an arts-activist, the one that presently most occupies my imagination is the artist as gravedigger, the artist as human excavator.

The image emerges as a result of yet another suicide bombing in Afghanistan’s capital Kabul on August 15, this time targeting a local educational center, in which scores of young students were preparing diligently for an upcoming university entrance exam. Boom. In one single act of human barbarity, dozens of aspiring and talented youth, the future of any country, were blown to pieces, and with them were wiped out hundreds of their dreams, desires and vocations.

At precisely the same time the attack happened, just a few minutes drive away, various members of the Afghanistan Human Rights and Democracy Organization (AHRDO; www.ahrdo.org), a local civil society organization and theatre platform, were in the process of concluding their rehearsals for a new anti-war play, provisionally entitled “20 Ways of Dying in Afghanistan and 1 Love Song”, taking inspiration from Pablo Neruda’s famous book of love poems. Absurdly, we had spent a good part of the afternoon rehearsing a scene, in which a suicide bomber is getting himself ready to go to heaven. In spite of the grim theme, the mood throughout the day was one of immense creativity, experimentation and artistic resolve, with the objective to create a play that serves as an honest attempt to portray the kind of crude madness people in Afghanistan have to live in day in, day out.

We finished our rehearsal in high spirits, getting ready to spend the evening with friends and families, trying to enjoy life in the midst of an otherwise increasingly unbearable overall context, haunted by 40 years of war and human cruelty. Then someone’s phone rang. Boom. We were told that a suicide blast had just happened right in the neighborhood where most of the performers, their families and many of our friends live. The room went chokingly silent. The first ambulances could be heard. The smell in our rehearsal space suddenly took on the stench of burnt human flesh. The line between joy and anguish is seamless in a place of war. Theatre of the Absurd.

What happens in the following 24 hours is the Afghan version of Audre Lorde’s “transformation of silence into language and action.” Together with other colleagues and comrades, those who until just a few moments ago rehearsed collaboration and solidarity on the stage are now exhibiting the same qualities as part of an all-out, collective emergency response to aid the victims and their families. There is no time to lose. An organizing committee is set up. People from all walks of life. The energy is frenetic. Phone calls. Tweets. Emails. A few sighs of rage and despair in-between. What to do with the (unclaimed) bodies? Most of them cannot even be identified, as their families often live far away, somewhere in rural Afghanistan, most likely totally unaware that the remains of the exclusive bearers of their family destiny are currently being prepared for burial by sympathetic, but anonymous morda shoye (corpse washers). The issue is pressing. The bodies need to be buried soon for religious reasons but also because otherwise they might be claimed by government authorities that will make sure that their own complicity in the seemingly never-ending cycle of violence in the country will once again be covered up.

More phone calls. More tweets. More emails. (No more sighs, every breath is needed to do justice for the victims). Finally, a decision is made. A mass burial will be organized the next morning. The burial ground is a hill not too far from the neighborhood where the attack took place. Until just a few hours ago this hill served as a popular picnic place but who feels like eating when your brothers and sisters have just been obliterated? Theatre of the Absurd. In short, the hill will be occupied and nobody is going to stop my friends from doing what needs to be done. “We are damaged and dangerous, and you will not stop us”, so goes the line of one of the characters in our new play. Nonetheless, security will again be an issue. Too many times in the past those who came to mourn the deaths of their loved ones themselves became victims of a suicide blast. Hence, discussions are held with a local police commander to guarantee security during the burial. He promises to help but later does not show up.

Who does show up, however, are hundreds of people, my actor-friends among them,  equipped with shovels, pickaxes and other digging material (as well as a single excavator), determined to lay to rest those who “met their end prematurely, whose death is not the proper conclusion of a life but its violent curtailment” (Quentin Meillassoux). The atmosphere is stifling. It is one of the hottest days of the year but no one cares about the heat, it is the culture of death and impunity ruling Afghanistan for so long (with generous support of large parts of the so-called international community. Shame on you.) that is making people’s blood boil. That, and the fact that all of sudden a number of armed police (not related to the aforementioned police commander) show up on the scene and violently try to drive the crowd away, injuring 2 people in the process. Needless to say, their mission failed. The digging begins. Shovels and spades everywhere. The bodies of the martyrs are carried in. Tears of Pain. Tears of Rage. Rebellious Tears. Revolutionary Tears. We will not forget. Enough is enough.

A few moments later, back in the office. The human excavators are spread out all over the place. Some are laying on the floor. Others are slumped into chairs. Another one lays knocked out on a sofa, having his blood pressure taken, somehow still managing to continue sending out tweets and phone messages. Empty eyes and exhausted silence all over. The sighs are back. Beckett may have lost his sanity in Afghanistan. Tea is served. I timidly dare to ask how it was for them up on the hill. Their answers cause the pain of snakebites: “The one thing I kept asking myself while I was digging the grave of our martyred friends is who will dig my grave if one day, probably soon, I will be killed in some stupid attack?"

“What is worst about the situation here in Afghanistan is that to die violently has become the norm and all you do is constantly ask yourself when it will finally be your turn to be killed. I wish that, when it happens, at least I will die immediately. I do not want to die a slow, lonely  death.”

and finally, “For how many more years can we ask the people of Afghanistan, day after day, to rise from the ashes of the corpses of their own mutilated dreams? How many more times can the Phoenix resurrect before it finally dies of exhaustion and despair?"

Boom. There it is. The ultimate questions about human life resulting from decades of war, loss, dehumanization and continuously betrayed hopes. Boom. Boom. Boom. No doubt, Beckett would have definitely lost his sanity in today’s Afghanistan. But then again maybe not, because from all I can tell, my arts-activist, human excavator friends are by no means willing to throw in their blood-soaked towels just yet. On the contrary, paraphrasing James Baldwin, I saw them shaken many times and I lived to see them broken but I never saw them give up. Their wings may be tired but their inner Phoenix is still rising every day.

PS: The opening performance of our new play will go ahead as planned. The performers decided that now was the perfect moment to continue the indictment of those who prefer to kill because they are too cowardly to live.

PS2: Of course my arts-activist, human excavator friends have names. However, they prefer to remain anonymous as they do not want to claim individual credit for what was a super-human collective effort.

In difficult moments like the one we are facing in Afghanistan right now, it is good to know that there are people and entities out there one can count and rely on for support, care and solidarity. My dear friend and colleague Jessica and the other members of The H.E.A.T. Collective belong precisely to such category of people. Tashakor. Manana. Thank you.

Hjalmar Jorge Joffre-Eichhorn is a German-Bolivian theater maker who uses different types of participatory, political theater such as Theater of the Oppressed and Playback Theater to work with communities in conflict and create possibilities for bottom-up dialogue and a search for grassroots solutions. Hjalmar has been working in Afghanistan since 2007 and is one of the co-founders of the Afghanistan Human Rights and Democracy Organization (AHRDO). 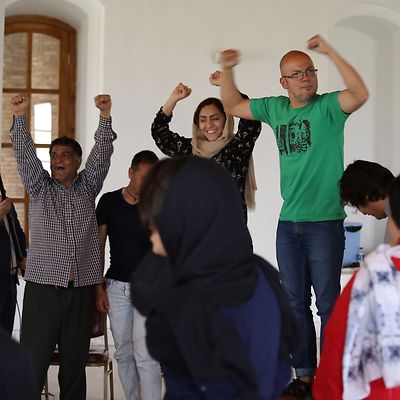