Connecting Peoples and Places through Culture

Divided into three main plenary sessions organized by theme, respectively "Culture in a Networked World", "Culture and Wellbeing" and "Culture and Investment", the international platform has been a unique instrument for delegates and speakers from more than 40 countries. The debates and workshops highlight the relevance of culture in the everyday life, in civilization and as a tool to overcome differences and tensions in society.

The Summit programme was defined by Sir Jonathan Mill, Director of the Edinburgh International Culture Summit and President of the EFFE International Jury, as follows: "a deliberate attempt to extend culture's reach beyond the conversations artists have with each other, and to highlight the opportunities of culture and its benefits to communities.". He also affirmed the importance of young people contributing to culture, because they are the future.

During the opening ceremony of the Summit, Scotland’s First Minister Nicola Sturgeon said: “I’m delighted that this year, more than 150 artists, policy-makers, producers and thinkers – from over 40 countries – are taking part. Their presence here speaks to our shared belief that culture is of central importance to any society.  It also demonstrates our shared commitment to improve the way we support, develop and promote our cultural sectors.” According to the Minister, it is undeniable that culture has a strong impact on humans’ well-being. This awareness led to more public investments and a better allocation of resources to support cultural industries and artistic initiatives.

Also Prime Minister Theresa May supports the initiative: “It is fitting that this city plays host to the world’s largest gathering of Culture Ministers. This Summit is an incredible opportunity for everyone here to share their experience and to look at policy ideas and interventions.” According to the PM, culture is an international language. She also stated that as world leader in the cultural sector, the UK is highly committed to better promote cultural and creative industries.

From other interviews and discussion, other conceptions of culture had come up. For instance, Matt Hancock, Secretary of State for Digital, Culture, Media and Sport of the UK, affirmed that culture transcends borders and can bring people together. Fergus Linehan, Edinburgh International Festival Director, underlined the importance of the presence of artists in discussions related to culture, because, as sustained by Catarina Vaz Pinto, Councilor of Culture in Portugal, they are emotionally involved in culture.

The Cabinet Secretary for Culture, Tourism and External Affairs in the Scottish Government, Fiona Hyslop, claims “It feels hugely important now, when the UK – despite Scotland’s vote to remain – is set to leave the European Union.  The festivals aren’t just a brilliant excuse for a party – although they are! – they also demonstrate, celebrate and strengthen a sense of internationalism that we hold dear.".

Another member of the EFFE International Jury, Ong Keng Sen, the Artistic Director of TheatreWorks in Singapore, gave his contribution as a speaker during the first plenary session of the Summit. Related to the main theme of the session, Culture in a Networked World, he not only asserted that “art is a belief” but also that communication and interpersonal experiences are essential to define ourselves.

Videos of the sessions

The Herald, Delegates from around the world attend culture summit, 23 August 2018 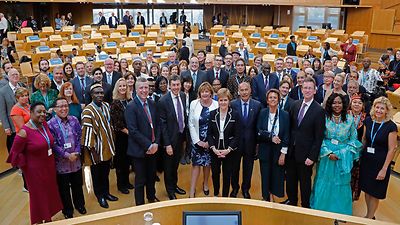