This February the Ljubljana Festival is holding the third edition of its Winter Festival. Between 2 and 6 February 2019 the Winter Festival will bring world-renowned musicians to the Grand Hotel Union and the Slovenian Philharmonic's Marjan Kozina Hall. The opening concert will feature the young Israeli soprano Rinnat Moriah and the acclaimed Slovene actor Boris Cavazza performing with the Slovenian Philharmonic Orchestra. The second evening of the festival will be characterised by timeless romantic arias sung by the soprano Elvira Hasanagić, the mezzo-soprano Monika Bohinec and the tenor José Cura, who on this occasion will also take a turn with the conductor's baton. The final evening offers something for fans of both classical and popular music, with a concert by the male voice a cappella group The Queen's Six, who like to inject a humorous note into their performances. Secure your tickets for the 3rd Winter Festival at the advance sale price by 8 December 2018. Let the musical offerings of the Ljubljana Festival be at the heart of your experience in the winter months as well!

The Ljubljana Festival and the Slovenian Philharmonic mark the opening of the Ljubljana Winter Festival and the end of the philharmonic festival Into The New Year With New Music with a special concert entitled Quiet, Please! The programme includes cult works by the twentieth-century composers R. Strauss, B. A. Zimmerman, I. Xenakis and G. Ligeti, in their first performances by the Slovenian Philharmonic. The orchestra will be conducted by Gregor Mayrhofer, who was assistant to the long-serving chief conductor of the Berliner Philharmoniker Sir Simon Rattle. Further variety will be added to this interesting and unique programme by the presence of two acclaimed individual performers: slovenian actor Boris Ostan, appears as the narrator in Zimmermann's Musique pour les soupers du roi Ubu, while the outstanding young Israeli soprano Rinnat Moriah offers us performances of Zerbinetta's aria from Strauss's opera Ariadne auf Naxos and Ligeti's Mysteries of the Macabre. Having debuted at La Scala in Milan and the Concertgebouw in Amsterdam, she has also appeared at the BBC Proms in London under Daniel Barenboim. Come and enjoy a remarkable evening of theatre, poetry and music at the home of the Slovenian Philharmonic.

On 4 February the famous Argentine tenor José Cura, a multiple award winner who is known for his remarkable concert performances and intense interpretations of operatic roles, particularly those of Verdi, will appear with the SNG Maribor Symphony Orchestra, conducted by Simon Krečič. His voice is a distinctive bold and bright tenor with tints of dark baritone that has brought him international fame. He says that for him to choose an operatic role it must be believable and he has to be able to relate it to everyday life. He likes characters with passions and worries, characters with flaws. After studying composition and conducting in his hometown, Rosario, he moved to Buenos Aires and honed his skills at the Teatro Colón. In 2007 he designed and directed La Commedia è finita, a re-imagining of Leoncavallo's opera Pagliacci, in his first creative experience of this kind. In 2015 he was appointed artist in residence of the Prague Symphony Orchestra. That same year he received the Sarmiento Prize for artistic achievements in his native Argentina. He will be joined on the concert platform by two internationally acclaimed female soloists. Elvira Hasanagić, one of the finest sopranos in Slovenia and indeed Europe, has won prizes at numerous international competitions. In 2017 the city of Dresden, in conjunction with a German association created to support opera singers, proclaimed her Young Artist of the Year. Since the very start of her professional singing career, she has been hailed by critics as one of the most promising new voices on the opera scene. The outstanding Slovene mezzo-soprano Monika Bohinec, currently a soloist at the Wiener Staatsoper, has appeared in major concert halls around the world, including the Musikverein and Konzerthaus in Vienna, the Royal Albert Hall in London, Carnegie Hall in New York, the Salle Pleyel in Paris, the Concertgebouw in Amsterdam and the Philharmonie of the Gasteig in Munich, among many others.

A vocal spectacular featuring six male voices awaits us on 6 February. The Queen's Six were established in 2008, the 450th anniversary of the accession of Queen Elizabeth I, from whom they take their name. Shortly after the group was formed, they had the privilege of performing for Her Majesty Queen Elizabeth II and Prince Philip, Duke of Edinburgh. Daniel Brittain, Tim Carleston (counter-tenors), Nick Madden, Dominic Bland (tenors), Andrew Thompson (baritone) and Simon Whiteley (bass) enjoy presenting their unique form of artistic expression to the widest possible circle of listeners. Their repertoire extends far beyond traditional choral singing: from austere early chant, Renaissance polyphony, madrigals and folk songs, to upbeat jazz and pop arrangements. Individually, members of The Queen's Six appear regularly in prestigious vocal ensembles such as Tenebrae, Polyphony, the BBC Singers, The Cardinall's Musick, Collegium Vocale Gent, the Gabrieli Consort, EXAUDI, the King's Consort, the Tallis Scholars and The Sixteen. They greatly enjoy injecting a humorous note into their varied programme, something that makes their performances a unique musical experience.

Secure your tickets for the 3rd Winter Festival at the advance sale price by 8 December 2018! 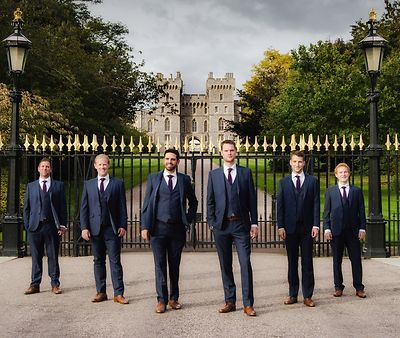