With its top-quality cultural content, Festival Ljubljana not only cultivates and educates, raises cultural awareness and contributes to general knowledge, but also provides experiences that broaden one’s mental framework. It gives talented young artists the opportunity to present themselves to wider audiences. For over two decades, it has run the Mladi virtuozi, or Young Virtuosi, international music cycle, which showcases talents and winners of various competitions and, at different times, has also supported a large number of youth orchestras and organised masterclasses.

This year, masterclasses will be held at the Ljubljana Conservatory of Music and Ballet between 15 July and 8 August as part of the 67th Festival Ljubljana. The artistic director for the masterclasses will be Branimir Slokar, who has nurtured a huge number of exceptional trombonists throughout his long and fruitful career.

Young musicians will be able to attend the masterclasses, led by 12 internationally renowned teachers, as soloists or as members of a chamber group.

Prof. Latica Honda-Rosenberg (violin) can be counted among the first representatives of the generation of young violinists who have established themselves in the concert world. Winning the silver medal at the Tchaikovsky competition in Moscow in 1998 paved the young violinist’s path towards an international career. Her musical idiom and her playing are eloquent, expressive, sensitive and variegated.

Prof. Wolfram Christ (viola), long-time first principal viola with the Berlin Philharmonic, principal viola of the Lucerne Festival Orchestra and Professor at the Hochschule für Musik Freiburg, has become highly regarded as a conductor epitomising sincerity and musical integrity. He is praised for his exhilarating and sensitive interpretations.

Prof. Jens Peter Maintz (cello) enjoys an outstanding reputation as a versatile soloist, highly sought-after chamber musician, and committed cello teacher. In 1994 he won first prize in the ARD international Music Competition, which had not been awarded to a cellist for 17 years.

Having received his first training in his native Romania, Prof. Petru Iuga (double-bass) was selected by Yehudi Menuhin for the International Menuhin Music Academy in Gstaad (Switzerland). After further training at the Hochschule der Künste Bern and the Conservatoire National Superieur de Musique in Paris, he became a member of the Ensemble Orchestral de Paris and principal double bass in the Munich Chamber Orchestra.

Prof. Aleksander Madjar (piano) started playing the piano under the guidance of Gordana Malinovic at the age of six, and later studied with Arbo Valdma, Elisso Virsaladze and Daniel Blumenthal in Novi Sad, Belgrade, Moscow and Brussels. He has won many international prizes and gave his debut with the Berlin Philharmonic Orchestra and Ivan Fischer in 1990.

Prof. Emanuel Abbühl (oboe) was principal oboist with the Basel Symphony Orchestra, the Rotterdam Philharmonic Orchestra and from 2006 to 2015 held the same position with the London Symphony Orchestra under Sir C. Davis, B. Haitink and V. Gergiev. He was also invited to become principal teacher at the Royal Academy of Music in London.

Prof. François Benda (clarinet) born in Brazil, comes from a long line of professional musicians. He completed his studies in Graz and Geneva (clarinet, composition, conducting) and gave his solo debut in 1988 at Zurich’s Tonhalle and at the Victoria Hall in Geneva. In addition to his solo career, François Benda is also professor at the Universität der Künste in Berlin and teaches at the Hochschule für Musik in Basel.

“One of Europe’s most renowned bassoonists” – Klassik Heute, Eckart Hübner (bassoon) is in demand with various chamber ensembles and as a soloist. He joined the Sinfonieorchester des SWR as their principal bassoonist in 1990. He also joined the faculty staff at the Universität der Künste, Berlin as Professor of Bassoon and Chamber Music

When just 18 years of age, Prof. Matthias Höfsu (trumpet) was engaged as solo trumpeter at the Philharmonic State Orchestra in Hamburg, where he enjoyed the fascinating world of opera for 16 years. At the same time, Höfs became a member of the German Brass ensemble, with whom he continues to achieve worldwide success. In October 2016 German Brass was awarded with the ECHO-Klassik – one of the most important awards for national and international musicians.

Prof. Radovan Vlatković (horn), one of the leading instrumentalists of his generation,  has travelled the globe performing extensively as a soloist and popularising the horn as a recording artist and teacher. In 2014 Vlatković was awarded Honorary Membership of the Royal Academy of Music (Hon RAM), an honour bestowed upon only 300 distinguished musicians worldwide.

Prof. Jörgen Van Rijen (trombone) is a principal rombonist of the Royal Concertgebouw Orchestra. He is also much in demand as a soloist with a special commitment to promoting his instrument, developing new repertoire for the trombone and bringing the existing repertoire to a broader audience. In 2004 he was awarded the Netherlands Music Prize, the highest distinction in the field of music, by the Dutch Ministry of Culture

The teachers will introduce themselves at a series of four concerts at the Knights’ Hall between 23 July and 5 August, while the most gifted pupils will perform on stage at the Ljubljana Conservatory of Music and Ballet between 20 and 28 July.

The patron of the 2019 Ljubljana Festival is the Mayor of the City of Ljubljana, Mr Zoran Janković. 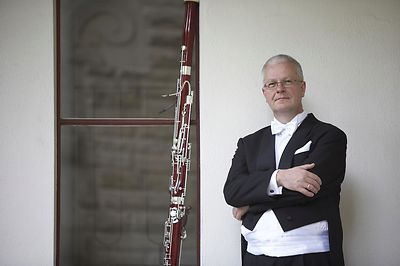