Reflections of Tom Creed, lecturer at the Festival Readings Sochi, on 3 inspiring days at the Winter International Arts Festival:

It was fantastic to return to Sochi for the second time and participate in this year’s Festival Readings. Once again the festival brought together a group of engaged and enthusiastic participants to discover a range of approaches to festival making.

I spoke about the experience of being an artist who also curates festivals, and offered practical advice, from this perspective, on how festivals can best support artists in their work and create the best conditions for artists and audiences to encounter one another, also emphasising on one of the great challenges, which is to strike a balance between what the audience expect and the change you want to bring as a festival director.

Guy Coolen, (Director Transparant and Operadagen Rotterdam - Belgium) In his lecture he elaborated on the example of Operadagen Rotterdam, an opera festival in a city with no opera house, conceived to help create a certain identity for the city and using the city in new and surprising ways. He enjoyed the Festival Readings, not in the least by exchanging ideas with the students.

"Politically it looks like we are not in touch with Russia, but in the arts we are nearby, we speak the same language’", he said. Festivals are a good platform for an exchange of thought, he thinks, we can learn from each other. He advised the students to invest a lot in a personal network, and to continue the conversation!

“I remember my days as a student, working as a volunteer for a film festival. That was the time she made up her mind to work in the arts! You are still in the age of dreaming,” she said to the students, “the most important thing is to follow your dreams and your heart in this moment to become really successful.”

It felt like the Festival Readings offered a window for these aspiring young Russian cultural managers into the wide world of festivals, providing inspiration and challenging them to develop new opportunities for artists and audiences in their own contexts.

In the context of the Winter International Arts Festival in Sochi, it was exciting to discover the parallel programme of emerging and experimental performance presented by the Territory festival from Moscow. Christel Simons (Moderator and External Relations Director European Festivals Association – Belgium) and I had the opportunity to discover a new work from students of the Moscow Art Theatre School presented in the grand hall of the old Sochi Marine Station. The actors spend months visiting and getting to know veterans of the Russian theatre – actors, managers, designers, critics – and using their own words to bring them to life in a series of intimate encounters. A project that felt like it captured some of the spirit of the Festival Readings – an encounter, a transfer of knowledge, a way of connecting past and future.

I would like to end with a quote by Ritsaert ten Cate “Nobody, but NOBODY can tell you about the festival of the future. It won't exist if you yourself are not reinventing it.” 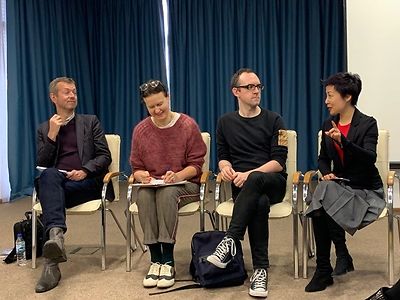