Under the patronage of H.E. Sheikh Nahayan Mabarak Al Nahayan, UAE Minister of Tolerance, the Abu Dhabi Music & Arts Foundation (ADMAF) announced a diverse headline programme as part of the Abu Dhabi Festival 2019 (ADF19) from 24 January to 30 March. With more than 100 events, 18 productions, two co-productions and two commissions across 25 venues, the Festival returns for its 16th year with an illustrious mix of artists and genres across Opera, Ballet, Orchestra, Jazz and Flamenco. Underscoring its commitment to championing global cultural exchange, creativity and innovation in the arts and furthering its symphony of global cultures, ADF19 will celebrate the Republic of Korea as its ‘Country of Honour’.

This year the Festival’s central theme is the ‘Culture of Determination’, as it joins forces with the Special Olympics World Games Abu Dhabi that are also taking place in the UAE capital during the month of March, in celebration of everyone who battles against the odds to make a positive impact on society. This theme is one each of us can relate to, and the brave Olympians who will be competing here are inspirational human beings whose drive and determination, in the face of often great adversity, should bring joy and hope to everyone.

During the press conference, a Letter of Cooperation (LoC) was signed between Abu Dhabi Festival, by H.E. Huda I. Alkhamis-Kanoo, and Special Olympics World Games Abu Dhabi, represented by Mr. Peter Wheeler, Chief Executive Officer of the Games. The LoC underlines the importance of inclusion between the arts world and institutions that help and promote people of determination, opening up opportunities for them to show the world their many talents.

The Festival will also host a compelling exhibition entitled Distant Prospects, presenting the history of European landscape painting from the world-renowned Liechtenstein. The Princely Collections, including permanent loans from The Hohenbuchau Collection and other private collections. Exhibited for the first time in the Middle East, these artworks – some of the world’s most important – survey the history of landscape painting over the course of several centuries and the exhibition will feature key figures in the Late Renaissance and Baroque artistic movements.

Parallel to the exhibition, an engaging educational programme will inspire visitors with panel discussions, guided tours and creative workshops. Extending the programme further afield, a specially designed residency will offer a unique experience for five practicing Emirati artists who will be given the opportunity to visit Vaduz and Vienna through a diverse itinerary of cultural engagements.

In line with its legacy to champion culture in all its forms, ADF19 will also recognise outstanding achievements in the music industry by prolific musical pioneers through the Abu Dhabi Festival Awards. This year’s recipients will include mezzo-soprano Joyce DiDonato, in recognition of her life long contribution to music; Aurélie Dupont, for her outstanding devotion to the art of ballet;  Barenboim – Said Akademie, for its commitment to building bridges through arts and culture; and the late Ousha bint Khalifa Al Sweidi in honour of her exceptional contributions to Emirati poetry.

Speaking at the press launch held at Emirates Palace, H.E. Huda I. Alkhamis-Kanoo, Founder of ADMAF and Artistic Director of Abu Dhabi Festival, said: “Today, the festival enters its 16th year and we are all proud of its status as one of the leading, most prominent culture and arts festivals in the region and the world beyond. And we are marking history at this point in time, coinciding with the country’s continued celebrations of the Year of Zayed, in which the Festival has played an important role, with greater meaning, making contributions that have further celebrated the legacy and values of our Founding Father, the late Sheikh Zayed. We have always been, and will continue to be, inspired by his vision of the future, and his determination that made the impossible possible and the unreal real.”

“We celebrate, Korea being the Country of Honour for the 2019 Abu Dhabi Festival, a country of immense heritage, steady in its modernisation and benefiting from its creative sources, its rich culture and the beauty of its arts.”

“Today, Abu Dhabi Festival 2019 celebrates the determined people – the champions of the Special Olympics World Games, those carrying the flame of determination and rising to seemingly insurmountable challenges, achieving victory through their will. From the determined people, we learn to exercise patience – how to face the hardship of the path, and we also learn endurance. We come to believe that success is not final, and failure is not fatal. It is the courage to continue that counts.”

H.E. Kang-ho Park, Ambassador of the Republic of Korea to the UAE: “Abu Dhabi Festival, as one of the biggest annual cultural events in the UAE, certainly has been contributing enormously to the region’s intercultural competence, so I am very happy that Korea could be a part of this wonderful celebration next year.”

Peter Wheeler, CEO of Special Olympics World Games Abu Dhabi 2019, said: “Music and arts transcend all boundaries, and provide fantastic opportunities for people of determination to express themselves, experience joy and increase their self-esteem. The World Games next year will focus not only on sport – we are planning a Cultural Olympiad for March 2019 celebrating the important role that people of determination play in all aspects of society. This year’s ADMAF event will be a powerful voice for celebrating differences and promoting inclusion, and we are delighted that musicians with intellectual disabilities will be able to showcase their extraordinary talents to audiences here in the UAE.”

The Festival’s Community Programmes, will include an engaging, innovative and inspiring calendar of events, exhibitions, performances and workshops for all ages, a highlight of which is the return of Festival in the Park – a two-night eclectic line-up of captivating stand-up comedy artists performing outdoors at one of the capital’s finest venues, the spacious and vibrant Umm Al Emarat Park. 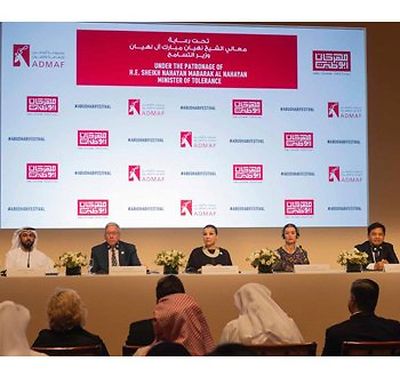