On 5 March, Lisa Batiashvili presented the program of this year’s Audi Summer Concerts in Ingolstadt. Under the motto “Fantastique!”, Batiashvili, the new artistic director of this festival, announced concerts that range from Hector Berlioz to Walt Disney and feature appearances by artists including Alfred Brendel, Gidon Kremer, Mariss Jansons, the Bavarian Radio Symphony Orchestra, Jean-Yves Thibaudet, Nino Machaidze, Gautier Capuçon, and the German Chamber Philharmonia from Bremen with Paavo Järvi.

The announcement of the program for the Audi Summer Concerts 2019 in Ingolstadt was devoted to the realm of the fantastic. In accordance with the festival’s motif, “Fantastique!”, the world-renowned violinist Lisa Batiashvili showcased her ideas as she takes on the role of artistic director of a festival for the first time, in Ingolstadt this summer.

“Music has always been a source of inspiration and imagination for humanity. This has shaped the musical culture of France, especially. In this spirit we are bringing together works, composers and performers that explore this motif from highly diverse points of view,” explained Batiashvili.

The thematic starting point and at the same time the grand finale of the festival is Hector Berlioz‘ Symphonie Fantastique, which will be performed on 14 July, the French national holiday, at an open-air classical concert in the Klenzepark. On the occasion of the 150th anniversary of Hector Berlioz’ death, this work more than any other represents the power of music to tell a story without the need for a narrator.

Disney’s animated film “Fantasia” is based on the same principle. In this case, music by Beethoven, Debussy, Bach, Gershwin and Stravinsky inspired Walt Disney’s enchanting cinematic short stories in 1940. “Disney in Concert – Fantasia” is the overture to the Audi Summer Concerts on 29 June, transforming the concert hall into a movie theater with this milestone in film history.

Once again in 2019, the festival reaches out to new venues in Ingolstadt. For the first time a concert will be held in the hall for assemblies of Audi employees, a space measuring almost 4,500 square meters in the GVZ B building. In contrast to this, for the salon concerts, successfully introduced last year, music enthusiasts can apply again this year and hold the events in their homes on 6 July.

The intimate, inward-looking search for the fantastic has its origins in German Romanticism, especially in the works of Robert Schumann and Franz Schubert. For Schumann’s oratorio “Paradise and the Peri” (7 July), a youth choir, the Audi Jugendchorakademie, and the historically oriented ensemble Le Cercle de l’Harmonie share the stage, directed by Jérémie Rhorer. The Deutsche Kammerphilharmonie Bremen (German Chamber Philharmonia from Bremen) conducted by Paavo Järvi looks at Robert Schumann in relation to Peter Tchaikovsky, for whose violin concerto Lisa Batiashvili will also take the solo part (5 July). In a chamber-music setting, on 2 July she will play with the French musicians Gautier Capuçon and Jean-Yves Thibaudet.

Performers of high caliber will appear at the other events, too, thanks to the participation of Mariss Jansons and his Symphonieorchester des Bayerischen Rundfunks (Bavarian Radio Symphony Orchestra), Alfred Brendel, Gidon Kremer, François-Xavier Roth and Les Vents Français. 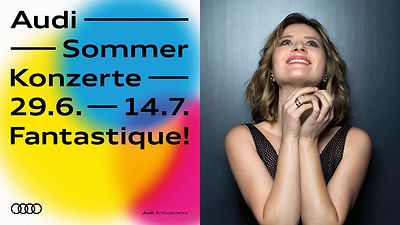