Ljubljana Festival - At the heart of your cultural experience

Even before the official start of the festival, you will have the unique opportunity to hear Verdi’s Requiem conducted by the great Plácido Domingo, in his first appearance as a conductor in Slovenia. This pre-festival event will be followed at beginning of July by the most eagerly awaited cultural event of the year: the opening of the 67th Ljubljana Festival, which starts with Aida, one of the best known and most frequently performed operas not only of Verdi's oeuvre, but in the entire history of opera. Director Dražen Siriščević’s imaginative staging will make the most of the outdoor setting and the opera will include an appearance by thoroughbred Lipizzaner horses from the stud farm in Lipica.

The events of the Ljubljana Festival take place throughout the summer and Slovenia’s capital will welcome some of the biggest names in music – performers of worldwide renown – right up until September. Performers at the 67th Ljubljana Festival will include: flamenco dancer María Pagés, bass guitarists Marcus Miller and Stanley Clarke, the modern dance company Aterballetto, the Teatro Regio from Turin with Verdi’s La Traviata, the Shenzhen Symphony Orchestra with Daye Lin, the Seongnam Philharmonic Orchestra with violinist Sergei Krylov, the Munich Radio Orchestra and the Bavarian Radio Chorus conducted by Ivan Repušić, a concert of opera arias with baritone Thomas Hampson and soprano Elena Moșuc, Mahler's Second Symphony with soprano Valentina Farcas and mezzo-soprano Bettina Ranch, the Russian musicals Onegin’s Demon and The Master and Margarita performed by the LDM Novaya Scena theatre company from St Petersburg, prima ballerina Svetlana Zakharova and friends, the Slovenian Philharmonic Orchestra with conductor Charles Dutoit, and many other artists.

The programme also includes smaller, more intimate concerts by first-rate chamber musicians. This gala concert that ends this year’s summer festival is particularly significant in that it is part of the farewell tour of one of the greatest conductors of the modern age, Zubin Mehta, who will conduct the Israel Philharmonic Orchestra. Colour your 2019 with superlative cultural experiences and attend the events of the 67th Ljubljana Festival.

More programme information can be found on the Ljubljana Festival website. 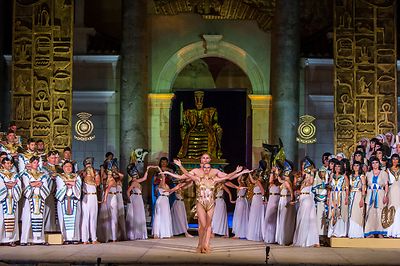