This year’s festival in Bergen, Norway, will take place from 22 May until 05 June, with longing as an overall theme running through the programme. The theme is apparent in the opening performance Waiting, a re-telling of Ibsen’s Peer Gynt seen from the character Solveig’s point of view set to Edvard Grieg’s music. Norwegian author Karl Ove Knausgård has created a modern Solveig for the performance, which will be directed by Catalan Calixto Bieito and have critically acclaimed Norwegian soprano Mari Eriksmoen in the leading role.

The opening performance sets the tone for hundreds of events at 30 venues in and around the city of Bergen in Western Norway. This year’s programme will present thirteen world premieres of theatrical and musical works and eight Scandinavian premieres.

‘As always, the programme presents art of all genres during fifteen remarkable days when the city finds itself at its most beautiful,’ says festival director Anders Beyer.

The Bergen International Festival continues its focus on art in virtual versions and offers a free VR lounge at the main venue of Grieghallen throughout the Festival period. Also on the programme is the crime mystery Frogman, which includes VR in the play itself.

‘Together with our many partners at home and abroad, the Festival offers extraordinary dreamscapes filled with art and experiences, creating space to think new thoughts and put the soul to use, says Anders Beyer, who has been Festival director since 2012.

New venue in the middle of the city

In the city square, a new epicentre for the Festival is created, hosting 22 different events. In the Festival tent in the square, acts include author Karl Ove Knausgård and band, voodoo priestess and artist Moonlight Benjamin and Joan as Police Woman performing solo. Outdoors, massive dinosaurs roam to the delight of young and old and the world’s most swinging potato-installation plays greasy tunes.

‘I believe in the transformative powers of art, and that experiences engaging our hearts enrich our lives more than we can fathom. In that sense, the Festival is a gift that society presents to itself’, says the Festival director. 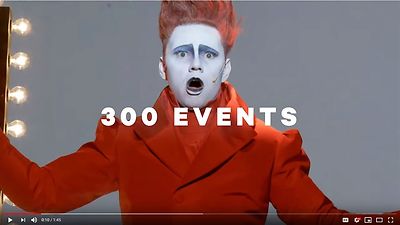