Summer has officially begun, and with it the 67th Ljubljana Festival, consisting of nearly a hundred evenings of culture between now and 5 September. Last night the Festival opened with an eagerly awaited performance of Aida which saw the Ljubljana Festival join forces with the Chorus and Corps de Ballet of the Croatian National Theatre Split, the Slovenian Philharmonic Orchestra, the Chorus of the Slovene National Theatre Maribor, members of the Slovenian Army Orchestra and Police Orchestra and 11 thoroughbred Lipizzaner horses from Lipica Stud Farm. The performance was directed by Dražen Siriščević, who specially adapted Aida to its setting in the heart of Ljubljana, even using the bandstand on the edge of Zvezda Park and the balcony of the Ljubljana University building (the latter occupied by an Egyptian sphinx). The opening event was attended by an audience of more than 6,000 and the large cast of performers and musicians, who conjured up a spectacular atmosphere in Congress Square under the baton of conductor Ivo Lipanović, were rewarded by standing ovations. The week ahead contains many treats for fans of dance and music. Thursday is the turn of flamenco star María Pagés, with her most recent creation An Ode to Time. On Friday you can choose between a pleasant evening with the Waidhofen an der Ybbs Chamber Orchestra and a gentle acoustic experience in the company of Tomaž Domicelj, an icon of Slovenia’s singer-songwriter scene.

An evening of passionate flamenco

The flamenco created by María Pagés fuses past and present. Born in Seville in 1963, she began developing her exceptional gifts as a young dancer with Antonio Gades’s professional dance company. Her career as an internationally acclaimed dancer and choreographer began in 1990 when she founded her own dance company, María Pagés Compañía, in Madrid. Since then she has enjoyed enormous success, capturing hearts all over Spain and beyond. She enjoys great international renown and has brought the beauty of this Andalusian dance to countless dance enthusiasts. Her central creative credo derives from a precise study of a dance form that is more than six centuries old. An Ode to Time is a performance incorporating elements of flamenco that talks about transience and infinity, about the temporary and the permanent. It is a personal reflection on her professional and personal experiences and a portrait of a mature artist who can look truth in the face. Her interpretation draws inspiration from Platonic philosophy and the artistic ideas of artists such as Marguerite Yourcenar, Jorge Luis Borges, John Cage, Octavio Paz and Marcel Duchamp. She remains faithful to her original and modern approach to flamenco with a great sense of responsibility and sensitivity towards its cultural legacy and sublime tradition, from which she draws her fundamental patterns and techniques – punteado, desplante or pateo, zapateado or taconeo. Important roles are also played in the piece by light, original music, mise en scène, rhythm, movement and undulation, like allegories of time. (4. 7., Križanke)

Waidhofen an der Ybbs, a city in Lower Austria, boasts a rich orchestral tradition that also includes the Waidhofen an der Ybbs Chamber Orchestra, founded in 1973. The orchestra is intensely involved in the cultural life of the area and has for many years provided musical training for young musicians. The many renowned musicians to have emerged from its ranks include Rainer Küchl, Stefan Vladar, Paul Gulda and Tamás Varga, among others. The orchestra has a broad and diverse repertoire ranging from concertos to symphonic works, from baroque masterpieces to contemporary compositions. It also performs oratorios and masses in collaboration with the Cantores Dei Allhartsberg and places a special emphasis on the heritage of the Strauss dynasty. Since 1985 the orchestra has been directed by Wolfgang Sobotka, who since 2017 has also been President of the National Council, the lower chamber of the Austrian Parliament. The orchestra’s performance at the home of the Slovenian Philharmonic will include works by F. von Suppé, R. Schumann and Johann and Josef Strauss. (5. 7., Križanke)

An icon of Slovenia’s singer-songwriter scene

Tomaž Domicelj returns to the Ljubljana Festival following a one-year break. His new concert New Acoustic continues the story of the three previous concerts in the Pure Acoustic series. Domicelj, who turned seventy last year, is in top vocal, instrumental and creative form, as demonstrated by his latest radio and concert recordings. His playing – on a wide variety of acoustic guitars – singing and commentary will be accompanied by Zdenko Cotič, aka Coto, known to his fellow musicians as Slovenia’s answer to Eric Clapton. Coto has worked with many singers and groups, among them Danilo Kocijančič, Tinkara Kovač, Massimo Savić, Janez Bončina (aka Benč), Rudi Bučar, Bazar and Halo, to name but a few. He released a solo album a decade ago and has for the last 17 years been a permanent member of singer Jan Plestenjak’s group. He is also increasingly recognised as a composer. “Coto and I have been friends for 45 years,” says Domicelj, “but this will be our first official collaboration. Our only problem is – what NOT to play. New Acoustic is only scheduled to last a few hours, after all...” 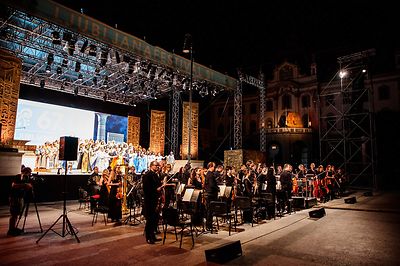