Flanders Festival Brussels International (Klarafestival) is happy to announce the appointment of Joost Fonteyne as the new artistic director.

Joost Fonteyne has built up broad experience in various cultural organisations: Limelight arts centre, Happy New Ears, Buda arts centre, Flanders Festival Kortrijk and, more recently, as co-founder and director of the cross-genre musical organisation Wilde Westen. This track record has allowed him to take on responsibility, establish a broad international network and, often working with partners, achieve a number of exciting and successful projects. The focus was increasingly on classical and contemporary music, for instance, as the driving force behind Flanders Festival Kortrijk. He and his team would churn out an impressive and well-attended festival and offer a programme that also appealed to younger generations.

Joost was selected from 30 national and international candidates, encompassing diversified profiles with a particularly rich experience. Joost Fonteyne offered strong credentials through his vision, knowledge and experience. He furthermore managed to build a large national and international network and is greatly admired. Over the years, Joost also developed a unique sense for devising and programming adventurous and contemporary concepts in a variety of different formats. And finally, what appeals to us as an organisation is his engaging, warm personality, his sense of social and societal empathy and his general drive for innovation. As the artistic director of a broadcaster festival he will pay special attention to the use of new technologies and the opportunities they offer.

The committee was also impressed by his inspiring, innovative and uniting note describing his view of the future entitled “We are all together”. This view starts from the idea that the festival is a celebration and builds on the identity of Brussels as multicultural capital. In his artistic vision he wants to unite classical music and the festival event. He also wants to commit to current social themes like diversity and gender balance and offer opportunities to young talent.

“I’m grateful to my colleagues, the organisations and Kortrijk, but it’s time now for me to share my expertise in a new environment. Klarafestival is a prestigious festival that is also artistically edgy, combines international projects with the best of what Flanders has to offer and works in the captivating crucible that is Brussels. This Brussels context is not new to me. It is a delightful meeting of the various festival partners, not least the vital partner Klara. Over the next six years, Klarafestival will maintain its keen artistic nature but at the same time it will also keep an eye on social themes, the diversity of the community in Brussels and a strong European foundation. I’m looking forward to getting my teeth into the future of the festival.”

“Joost is an adventurous programmer with a very broad taste in music. He is moreover a bridge builder with a pronounced vision of the capital of Europe. Under Joost’s guidance, Klarafestival, which works with so many partners, will extend its hand even more to that diverse Brussels audience. I wish him a wonderful time.”

President, Michel Vermaerke on behalf of the Board of Directors:

“With the appointment of Joost Fonteyne, we are pleased to be able to work further on the high-quality selection that Klarafestival already offers. We are convinced that we will break new ground and expand our audience even further with the experience and tradition of classical music.”


The Board of Directors has arrived at this appointment on the recommendation of a special selection committee, in addition to opinions provided by experts Chantal Pattyn, network manager at Klara (VRT), Jan Briers, Founder- Director of Flanders Festival and current artistic director Hendrik Storme. The selection committee is composed of eight members of the Board of Directors, a representative of the festival’s youth council and the general director. In carrying out its task, the committee received professional assistance by Karsten De Clerck from Egon Zehnder and by Marc Ramault from Cross International. 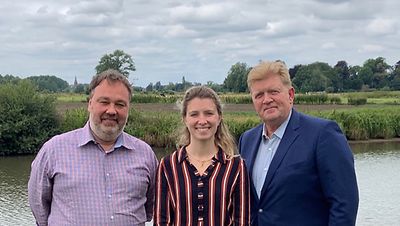