Each year, the Ljubljana Festival dedicates part of its August programme to musicals. In previous years, we enjoyed some of the greatest hits of this lighter genre. However, musicals should not be underestimated, since they demand a combination of acting, dancing, and singing skills that few artists are capable of delivering. While most musicals staged in recent years were Slovenian, this year’s offering brings a pair of productions that promise to be unlike any we have seen before. The large ensemble of the LDM Novaya Scena theatre company from St Petersburg is visiting Slovenia for the first time to perform two literary-inspired musicals – The Master and Margarita and Onegin’s Demon.

The musical Onegin's Demon is based on Pushkin’s famous novel in verse, but presents a slightly different version of the tale of a bored and disillusioned young man whose thoughtless choices bring misery to his life and the lives of those dear to him. The musical reveals man's deepest feelings and leaves no room for stereotypes or censorship. The production was conceived by some of the best Russian poets, choreographers, and designers, while the score was written by six composers. The number of people involved in the show is enormous. It takes more than 60 people just to run the show smoothly: the movements of actors, music, lights, video, and all sorts of special effects have to be perfectly synchronized. At the same time, no two shows are alike. Every performance is a little different because of the interactive nature of the show, the multiple casts, and improvisational elements. In the words of director Sofia Streisand, theatre, unlike film, is a genre of the here and now. By its nature it requires an audience, and their immediate reaction and energy are always an important part of the performance. Part of the action in Onegin’s Demon thus takes place in the auditorium, so close to the audience that they can touch the actors. As the director has stated: “We are bringing our best cast. Ivan Ozhogin is an international musical star, his stage presence and charisma are hypnotising. Anton Avdeev is one of the most moving actors I’ve seen, his voice penetrates the heart. Teona Dolnikova has a unique vocal range and technique that can be compared to those of singers like Mariah Carey or Adele.”

The musical The Master and Margarita is based on the eponymous satirical, fantastical novel by Mihail Bulgakov, one of the literary masterpieces of the 20th century. Bulgakov wrote a number of novels and dramatic works that were banned several times, and is considered one of the greatest satirical writers of the previous century. The Master and Margarita is imbued with a philosophical reflection that delves deep into the opposition between good and evil, as well as between art and reality. The first to attempt to stage the novel as a musical was made by Sir Andrew Lloyd Webber, but he abandoned the challenging undertaking after a year. The project has now been revived by a group of top Russian artists, who have created an unforgettable spectacle that draws the audience right into the heart of the action with 3D scenography, “aroma effects” and a dramatic atmosphere. The diabolical background of the show is emphasised by the involvement of six composers, six librettists, 66 actors and 666 costumes. The artists have succeeded in creating a blend of fantasy and reality which, aided by advanced technology, leads the audience through the labyrinth of human passions and reveals some of the hidden meanings of the great novel on which it is based.

More information and tickets at ljubljanafestival.si. 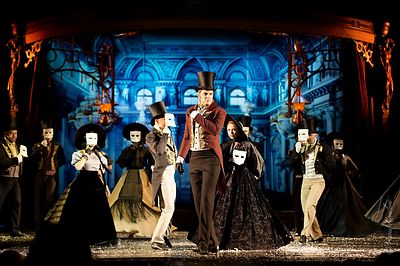