It was with great pleasure that EFA accepted the invitation of the Festival Internacional de Música Antiga I Barroca de Peníscola to visit the festival and participate in a meeting with international programmers and Ensembles of Early and Baroque Music from the Valencia region.

The International Festival of Ancient and Baroque Music of Peníscola was born in 1996 and celebrated this year it’s 24th edition between the 1st and 12th of August at the Papa Luna Castle. It specializes in historicist interpretation, where some of the top specialists in this genre have participated. It has become an international benchmark for music between the 12th and 17th centuries with a very diverse programme, from soloists to chamber opera and orchestral concerts. In this 24th edition the focus was vocal music in all its expressions considering human voice as a core element of music history.

On the 6th Aug 19 audience and guests were treated to the enchanting concert of Elia Casanova & La Tendressa, an ensemble from Valencia with a selection of arias and madrigals from the sixteenth century under the title El Universo sulla pelle. During this delightful evening Elia Casanova toasted us with a selection of works by Benedetto Ferrari, Stefano Landi, Tarquinio Merula, Giovanni Battista da Gagliano, Giovanni Felice Sances, Girolamo Frescobaldi, Barbara Strozzi, Andrea Falconieri, Giovanni Paolo Colonna and Johann Hieronymus Kapsberger some of which had never before been recorded.

At this occasion the Festival Internacional de Música Antiga I Barroca de Peníscola and Institut Valencià de Cultura organised, with the support of AC/E  – Acción Cultural Española, a meeting with the international guests and ensembles from Valencia intended to open doors for ensembles to contact with International programmers and showcase the talent existing in Spain. Amongst the international participants were Moisés Santiesteban, Coordinator of the Sacred Music Department of the Padre Félix Varela Cultural Centre in Havana (Cuba), José Vargas, coordinator of the  International Latino Cultural Center of Chicago, Maciej Kopinski, de Actus Humanus Festival de Gdansk (Poland) and Eva Nunes representing the European Festivals Association.

A substantial group of diverse musicians joined this meeting to present their different proposals from younger projects to well-known ones, from duos to larger ensembles including proposals paired with training and research. The group had the pleasure to discuss with:

A very heartfelt thank you to Leonardo Marqués, Vicent Alberola Vidal, Pere Manuel Aragó and Marga Landete for their very warm welcome at the Peníscola Ancient and Baroque Music Festival and the opportunity to meet all these ensembles and to Pablo Eulate from AC/E Acción Cultural Española who facilitated the contacts. 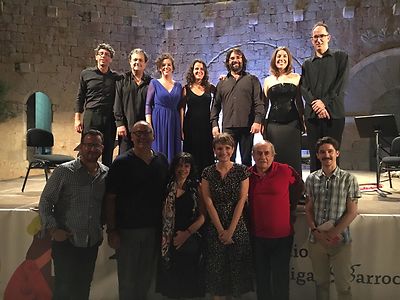