After the founder of the Perelada Festival passed away in 2018, it seemed right to commemorate permanently her belief in the power of the arts. Carmen Mateu was the driving force behind the festival, held since 1987 in the extensive grounds of this mediaeval castle in a village between Barcelona and Girona. 'She loved the arts with such passion!' says director Oriol Aguila. 'We decided we should match the award to the themes of our festival.'

The award is designed to cement the way the festival likes to work with young professionals throughout the opera and dance worlds. It will alternate between them. The nominations are open until the middle of September but the deadline is likely to be extended for another month. 'Carmen's   great interest was in young people and we felt,' Oriol says, 'that we needed to reflect positive European values too.'

There are, of course, many competitions for singers and dancers around Europe. The Carmen Mateu Award is original in that it will focus on a different aspect of the operatic and dance arts each year. The prize in 2020 could go to a director, designer, conductor or composer in opera, as well as to a singer. In dance (this year) it could be taken by a choreographer or company director and the various other disciplines of dance will be recognised as the years go on. This first year ballet (described as 'classical or neo-classical dance) is in focus but in future years it will cover contemporary dance and flamenco.

The prize itself is made up of one section that goes direct to the recipient (€20000) and a lesser amount (€10000) that will cover the costs of the winner's future participation at Perelada. For the first year eligibility is for those born between 1993 and 2003 (so potentially some very young artist could benefit). 'But the year range will change – so while a choreographer might be 23, an opera composer might be 35.'

Entry is open to any young professional in the relevant category working in Europe (so nationality is not important) or a European working anywhere else in the world. That is highly inclusive because Europe is defined as the 47 countries of the Council of Europe, not just the 28 of the European Union.

Candidacies can be submitted until 15 October 2019. 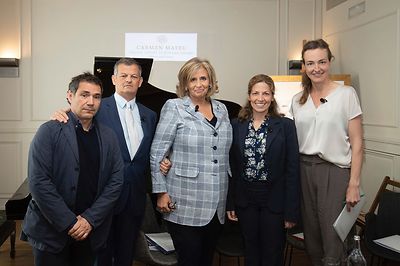