Summer in the company of top artists

The summer draws to a close and with it the 67th edition of the Ljubljana Festival, which offered a rich variety of genres and the company of renowned foreign and local artists. The festival summer was very successful, offering more than 88 events that were seen by more than 62,000 people from Slovenia and abroad in just over two months. Moreover, in August a concert by the Mariinsky Theatre Orchestra from St Petersburg, conducted by world-renowned Valery Gergiev was added to the programme.

Among the unforgettable highlights were the appearance by the legendary tenor Plácido Domingo in the role of conductor, the official opening with Verdi's Aida and thoroughbred Lipizzaner horses from Lipica Stud Farm, flamenco evenings with the passionate María Pagés, concerts dedicated to two of the greatest bass guitarists Marcus Miller and Stanley Clarke, opera arias performed by Thomas Hampson and Elena Mosuc, the modern dance company Aterballetto, Mahler’s Second Symphony with soloists Valentina Farcas and Bettina Ranch, the most beautiful choirs performed by the Munich Radio Orchestra with the Bavarian Radio Chorus, Russian musicals Onegin's Demon and The Master and Margarita, the “mirror” interpretation of Verdi’s La Traviata by the Teatro Regio from Turin, the wonderful prima ballerina Svetlana Zakharova, the farewell tour of Zubin Mehta with the Israel Philharmonic Orchestra, and many other exceptional chamber concerts. In just over two months, the festival included more than 88 events featuring more than 4,000 artists from more than 40 countries.

For the fourth year in a row, the Ljubljana Festival also took place on pleasure boats on the river, offering a unique view of the city and performances by students from the Academy of Music and the Conservatory of Music and Ballet in Ljubljana, while a series of masterclasses by internationally acclaimed professors was this year’s addition to the festival. In the closing days of the festival, Marko Hatlak will join forces with guitarist Vlatko Stefanovski to present his new music project on September 21.

For lovers of fine arts, an exhibition of works by the sculptor Zmago Posega will be on display until September 30. We end the 67th Ljubljana Festival with even more enthusiasm, with sold-out venues and satisfied listeners indicating that we have attracted many new visitors this year as well. We should not, of course, forget the loyalty of our sponsors and the support we receive from the City of Ljubljana and its Mayor Zoran Janković, which enable us to invest in an even more impressive programme with every new edition. 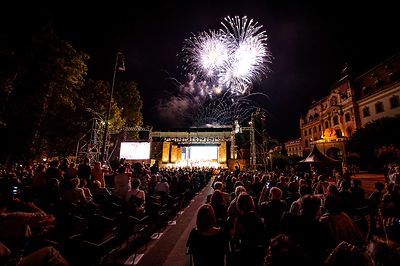