A Cultural Europe - in soul, in spirit, in words and deeds

The EFFE Awards Salon last Thursday 26 September showed us again: Europe is happening. Now. Whatever the circumstances, we are always and continuously in a time of building Europe. Let us assume that the European Union is more than a sum of individual countries, it is more than a citizens’ project. Europe is also a community – as, indeed, its name used to be.

A community is a necessary matrix for each festival. The scale of the community can differ. The local or urban context is inherently a daily part of each festival. It would be wrong otherwise. The global, though, is also part of the local roots: as a discourse, as something present in our daily lives. It is not something ‘on the other side’; it is the “roots from above”.

The step to a global community is realistic if we see Europe as an important preliminary stage for  global collaboration. Europe is based on the principle of diversity which goes beyond national borders. In this train of thought, EFA, the European Festivals Association, follows two tracks: Europe as a challenge to embrace the roots from above; and the arts as the roots or the building blocks of a festival from below. These two tracks are present in EFA since 1952 when the philosopher Denis de Rougemont and composer and conductor Igor Markievic founded it: a European federalist and an artist from Ukraine.

EFA as a community of festivals is based on this joint fascination with the ‘roots from above’.  It is a privilege to bring together festivals which can refer to joint successes as well as a shared concern: Europe. This consciousness is a source of energy and a permanent task for EFA. It is special, it is engaging, it is exciting, it is demanding. It binds Europe’s festivals together.

Europe’s festivals would be missing an important part of their function if they were totally consumed by their very local attractiveness and mission, and did not see the inspiration inherent in the European project and process. The building of our European community is demanding. It needs the contribution of various players. Festivals live these ‘roots from above’ that Europe is giving to them. The ‘impulse Europe’ is used by festivals, and festivals’ spirit is used by Europe.

The work of EFA and other umbrella organisations in the field has been developed into a successful formula. The initiatives of EFA create an added-value in the context of vast communication and global interconnections and in the role festivals play. EFA has launched new ways of implementing its mediator mandate for arts festivals, above all through permanent contacts and dialogue between festivals, decision makers and stakeholders in new programmes such as the one called ‘Europe for Festivals, Festivals for Europe’.

Europe’s governance is or should be informed by the needs that are alive at local level. And we are here to provide that platform for dialogue.

Policymaking is or should be inspired by the discussion. Democratic decision-making needs a mechanism of articulated voices that translates single expressions in an organised way when 500 million citizens need government. Civil society and cultural players have an important say in the direction of Europe’s journey.

If we invite you to something, it is this: communication, interaction and exchange - all that matters in our communities, and in our alliances.

That is why the European Festivals Association constructively supports the call of many of our colleague networks to keep culture high on the agenda in the new European policies and have a Commissioner for Culture and cultural competences in other commissioners’ portfolios.

Further reads and actions from colleagues:

-          Sign the petition of Culture Action Europe to bring culture back 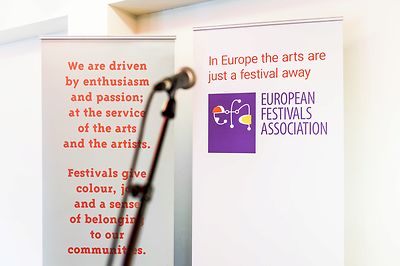