Maltese composer Ruben Zahra has only just finished his first as Artistic Director of the Malta International Arts Festival (MIAF) but already he is very clear about how he wants MIAF (in the first half of July) to progress. 'Malta missed out on almost 100 years of music,' he says, because of its isolated position, lack of professional arts institutions and the effects of World War II.

“The highlights of the 20th century passed us by. We were just not exposed  to the new classics, from Stravinsky onwards. So I am trying to use the festival as a platform to introduce them here. For example, Bartok's Concerto for Strings, Percussion and Celeste has never been performed in Malta and it shall be one of the highlights in the 2020 programme of MIAF. I'm trying to give audiences here a chance to judge important works like this live.”

“That is one strand. Another strand of my job is to curate in an interdisciplinary way by empowering artists to come together.” He cites a cabaret evening in this year's programme, with elements of William Walton's Facade (a 1920s mixture of declaimed nonsense verse and satirical chamber ensemble), Mystries of the Macabre by modernist Hungarian composer György Ligeti and three pieces for four hands at one piano by living Maltese composers, choreographed for six dancers on the outdoor main stage close to Valetta's harbour.

As a composer Ruben is committed to interdisciplinary expression. His children’s opera KIRANA has toured to 14 different cities across Europe over the past three years and he currently has four productions touring internationally.

“As a composer and producer I learned how each different specialist artist brings their own audience, so by combining you are always developing that public.”

A third strand he feels is still in its infancy but has enormous potential is to get the festival off the island altogether and onto the sea. He has created a floating stage that takes productions to the small seaside communities that nestle between Malta's cliffs away from the conurbation that Valletta and its satellite towns has become.

He achieved this by chartering a sailing yacht – not the modern racing kind but an old wooden schooner – on which actors and musicians tell the story of the islands. “The Director of the Maritime Museum is an expert on the 17th century Corsairs,” the pirates who used Malta as their base as the Venetian and Ottoman empires loosened their grip, “and he has the research that let us explore stories you would never find in a guidebook”.

More challengingly he is issuing an open call to the country's musicians, actors and dancers to come up with projects that can use a boat as their stage and take it into the small harbours. “There are a few logistical problems, of course, like the wind and how to keep the decks from moving around too much for the dancers, but it can be an adventure for the artists – and it builds an important relationship with the villages who can feel part of the festival on their own quayside.” 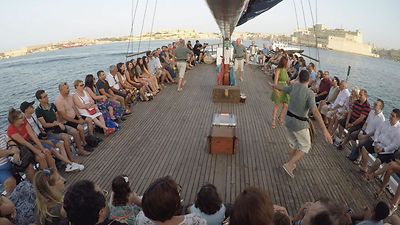