Festival Ljubljana presents the Winter Festival that will take place from 2 to 6 February 2020 in the Union Hall in Ljubljana. The fourth edition of the festival, by now traditional, will feature a number of internationally renowned pianists. Accompanied by the Slovenian Philharmonic Orchestra, they will perform the most beautiful piano and symphonic works from Beethoven’s extensive repertoire. Next year we will celebrate the 250th anniversary of the birth of the great composer, in whose rich oeuvre the piano played a central role. Ludwig van Beethoven became a honorary member of the Philharmonic Society in 1819, exactly one year after the first performance of his Pastoral Symphony in Ljubljana. Beethoven even sent a transcription of the score with his own corrections to the Philharmonic Society, which is kept at the National and University Library in Ljubljana. Tickets for the 4th Winter Festival are available at ljubljanafestival.si, at the Križanke box office, at Petrol service stations and Eventim sales locations.

The opening evening will start with the third version of the overture that Beethoven wrote for his only opera, Leonora. Next will be the Piano Concerto No. 1 in C major, Op. 15, highlighted by the performance of Imogen Cooper, one of the finest interpreters of the classical and romantic repertoire. In addition to her extensive oeuvre, the British pianist, daughter of the renowned music critic Martin Cooper, is the recipient of numerous international awards and an honorary member of the Royal Academy of Music. The evening’s second part will feature Beethoven’s Piano Concerto No. 3 in C minor, Op. 37, performed by Alexei Volodin, a regular guest of the world’s most famous orchestras, such as the New York Philharmonic Orchestra, the Leipzig Gewandhaus Orchestra, the Zurich Tonhalle Orchestra, and the London Royal Philharmonic Orchestra. The performances will be accompanied by the Slovenian Philharmonic Orchestra under Bojan Suđič, one of the most prominent Serbian conductors of the younger generation.

On the second concert evening, the Slovenian Philharmonic Orchestra will perform under the baton of the Hungarian conductor András Keller, who is also the founder of the famous Keller String Quartet. Two renowned pianists will perform as soloists with the orchestra. Leonel Morales was born in Cuba and moved to Spain at the age of 25. He has achieved international recognition by winning highest awards in numerous international competitions. He teaches at the Mozarteum Summer Academy in Salzburg, and at the Faculty of Music and Performing Arts of the University Alfonso X El Sabio in Madrid. The Slovenian pianist Tatjana Ognjanović studied piano with Dubravka Tomšič-Srebotnjak at the Ljubljana Academy of Music, where she graduated in 1986. She has received awards at a number of piano competitions, including a special award for the best performance of a Beethoven sonata, which she won on three occasions. She has been teaching at the Ljubljana Academy of Music since 1993. Her performance will include the Piano Concerto No. 2 in B-flat major, Op. 19, Piano Concerto No. 4 in G major, Op. 58, and Symphony No. 1 in C major, Op. 21. It is worth highlighting that the fourth piano concert was performed by Beethoven himself at the public premiere on 22 December 1808 in Vienna, on which occasion two of the most renowned works of classical music – the Fifth and Sixth Symphonies – were also premiered.

The closing evening will bring performances of the famous Piano Concerto No. 5 in E-flat major, Op. 73 and Symphony No. 5 in C Minor, Op. 67. The piano concerto was written at the turbulent time of Napoleon’s campaigns, and earned the nickname “Emperor” for its fiery and martial character, while the Fifth Symphony is probably the most famous symphonic work of all time. The piano concerto will be performed by Alexander Gadžijev, a pianist from Gorizia who is considered one of the finest domestic pianists of the younger generation. He started performing independently at the age of eleven, and studied with renowned professors and pianists. He is the recipient of numerous awards, while his technique and virtuosity have drawn nothing but superlatives from critics. His performance at the Winter Festival will be accompanied by the Slovenian Philharmonic Orchestra under the British conductor Jan Latham-Koenig, who has been the artistic director of the Kolobov Novaya Opera Theatre of Moscow since 2011. Latham-Koenig is also the artistic director of the Philharmonic Orchestra of UNAM in Mexico City and the Flanders Symphony Orchestra, and collaborates with opera houses such as the Teatro Massimo of Palermo, Teatro dell’Opera di Roma, and many others.

More information and tickets at ljubljanafestival.si.

The founder of the Ljubljana Festival is the City of Ljubljana, which also provides financial support:

The founder of the Ljubljana Festival is the City of Ljubljana. The Festival has been a member of the European Festivals Association (EFA) since 1977.

Find out more about this festival. 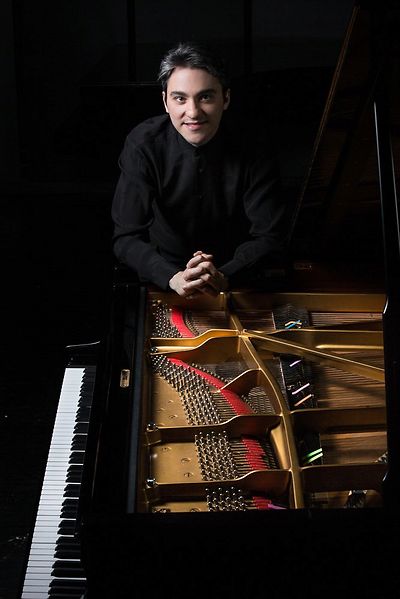