In 2021 Music Biennale Zagreb will celebrate its 60th anniversary and the composer recently appointed to guide the programme, Margareta Ferek-Petric, has been contemplating how to recognise it. 'Of course we need to pay attention to the history but I think the most important thing is the contrast between old and new.'

The festival was founded by the Croatian composer Milko Kelemen (who died in 2018 just short of his 93rd birthday) and Margareta feels that the way his music evolved also maps that of the festival itself, following the tides of stylistic fashion. 'There is a contrast in Kelemen's creative phases: one under the school of Stjepan Sulek whose pupils lean strongly to the traditional approach which include some typical Slavic elements - clear harmony, lively rhythms, clean forms - and the next phase that resulted from coming into contact with composers and projects outside Yugoslavia's borders - being a pupil of Messiaen in Paris, Fortner in Freiburg and part of Siemens Electronic Music Lab in Munich etc., which made his work more experimental and open to international streams.'

'So this contrast is a foundation of the idea to build up a festival focus that confronts old with new, through which we can celebrate our founder but also include new voices, representing the contrasts between generations, and making the term time a main thematic protagonist.'

MBZ has always been a composers' festival, organised and directed from the Croatian Composers' Society, and always open to the streams and currents of international musical life – in the early years helped by Yugoslavia's position as being part of the communist but not Soviet bloc, and so open to both West and East of the political divides. In its first three decades Stravinsky, Cage, Maxwell Davies, Stockhausen, Berio and Kelemen's old teacher Messaien were among the participants. After 1991, the festival was directed for a further 20 years by Ivo Josipovic, who cemented MBZ's status through difficult times but just as significantly was elected Croatia's President between 2009 and 2015.

Kelemen lived in Germany for the latter part of his life and Ferek-Petric has taken a similar path north, settling in Vienna, while maintaining the links to Zagreb. She finds the Austrian capital a curious mixture of the conservative and the radical and feels that it has shifted more to the radical end in recent years, perhaps just as the country's politics have edged in the opposite direction. 'It has gone from the grey to the colourful,' she says, 'and I feel you get a window on the musical world in Vienna that only very few other cities have. What I really appreciate about Austrian cultural politics is that you have a whole range of grants and scholarships with good money. In Croatia the Composers Society is always there for you but it is centralised. In Vienna there are lots of little islands, organisations you can work with. It's more diverse.

Margareta and I return to talking about the shape of her first festival in charge, from the point of view of its artistic goals and collaborations. 'Music can be a mirror of time. It has a strong stamp of the year it is made, especially if it is using technology. So my festival needs to be a witness to its time – to have people with strong personalities, for whom every new work is a little revolution.'

She does not see the music in isolation. 'This year, at the 2019 festival, before I was appointed but had a commission being played, it was really great. There was a proper festival feeling with people coming who normally just like baroque performance or literature, or theatre. I really want to continue that and at the same time defend the concert format. There is so much distraction these days. It is so good to have somewhere that you can go to, sit still, shut up and just listen.'

'And I don't understand this fetish for young composers. Surely the further you go in life, the better you become. I don't want to commission pieces that will only be performed once.' In her own music she does not acknowledge any predominant influences. 'The people who I take things from are my colleagues – a gesture, a phrase, a theatrical flourish, a structure. I like to support the instrumental sound with voices from the ensemble; whispering, laughing, talking a few words that change the sound picture. But it's all a fight about time, whether in my music or in the festival – how to control it but, more importantly, how to transcend it.' 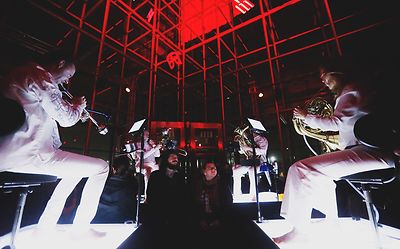