María Pagés, Julio Bocca and Tamara Rojo form the international panel of judges specifically assigned to this first year of these awards for the discipline of Dance, and specifically Ballet.

The winner, selected from among 48 candidates from 16 different countries, will receive a prize of €30,000 for her professional career, and will be invited to perform at an upcoming edition of the Castell de Peralada International Festival.

Barcelona, 16 December 2019.- The judges of the Carmen Mateu Young Artist European Award for Opera and Dance have made their decision today, 16 December, in Barcelona, and acknowledge the excellent technique and artistic performance of Maria Khoreva, currently First Soloist in the Mariinsky Ballet since last October. The panel of judges, made up of prestigious artists including María Pagés, a dancer and choreographer and the director of the María Pagés Company, Julio Bocca, a former dancer, director, choreographer and ballet master, and Tamara Rojo, the artistic director of the English National Ballet, has underscored the winner’s striking stage presence and professional career, as well as her future potential. Her ambition for progress and her intention to use the award to continue her professional development and collaborate with new choreographers, is also noteworthy. At the age of 19, Maria Khoreva has already established herself as a clear reference point for young people in the world of Ballet.

After graduating from the Vaganova Ballet Academy, Maria joined the corps of the Mariinsky Ballet in 2018, where she is currently a soloist. During her professional career, she has played countless roles: Terpsichore in "Apollo"; Masha in "The Nutcracker"; Paquita in "Paquita"; Nikiya in "La Bayadère" and Medora in "Le Corsaire", among many others. This young ballerina specialises in classical dance, though she is also interested in contemporary dance. She loves the social media, such as Instagram and YouTube, which she uses as tools to disseminate the beauty of her work.

We look forward to having Maria Khoreva come to Barcelona within the first six months of 2020, for the official presentation of this award. Of the total endowment of €30,000, Maria Khoreva will be directly receiving €20,000, and the remaining €10,000 will be allocated to her performance at one of the upcoming editions of the Castell de Peralada Festival. The winner will additionally receive a signed sculpture by artist Santi Moix, inspired on the camellia flower, in memory of Carmen Mateu, designed by Bagués Masriera.

At this first celebration of the Carmen Mateu Award for classical and neo-classical dance, the application period closed with a total 48 candidates from 16 different countries. Indeed, this was an unprecedented turnout thanks to the collaboration of Opera Europa and the European Festivals Association, which have joined forces with the Award organisers to spread word of this competition.

The requirements for the presentation of candidacies include: having been born between 1993 and 2003 –being between ages 16 and 26 in 2019–; having achieved high artistic accomplishments; being a national of a European Council member state or being a citizen of another country around the world while developing their career in a European Council member state; and being at the gateway of an important qualitative advance on their professional path.

Following the closure of  the submission term for candidacies at the end of October, a committee of experts appointed by the Director of the Peralada Festival and the Vice President of the Panel of Judges of the Awards, Oriol Aguilà, made an initial selection of the 12 finalists that were ultimately passed on to the Judges for their evaluation and decision. The selection committee was made up of journalist and dance critic Carmen del Val, Mari Carme Ventura, the Director of Dance and Supers at the Gran Teatre del Liceu, Josep Maria Escribano, the Director of the Music and Dance Season of Andorra, and Adrià Fornés, the Artistic Director of the Cultural Centre of Terrassa.

This competition was conceived in May of this year to perpetuate the memory of Carmen Mateu, one of Spain’s great patrons of art, and to carry on her legacy of tenacious, steadfast and outstanding patronage in the field. With the mission of becoming a leader and a cultural reference in the promotion and prestige of the disciplines of opera and dance throughout Europe, the Carmen Mateu Award acknowledges the professional paths of young artists and aims to contribute to the development of their careers.

The Carmen Mateu Young Artist European Award for Opera and Dance is organised by the Castell de Peralada Foundation and was created to perpetuate the memory of Carmen Mateu, to acknowledge the professional paths of young artists in the disciplines of opera and dance, and to contribute to the development of their careers and to the promotion and prestige of these disciplines throughout Europe (Europe is understood as the member countries that make up the European Council).

Born out of the Peralada Festival, which Carmen Mateu began thirty-three years ago, and sharing its essential spirit, the Young Artist European Award in Opera and Dance was conceived to become a leader and a cultural reference of support to creation in these fields.

The object of the prize appeals to the Festival’s founding values, which were established by its creator, Carmen Mateu, and her family.

Carmen Mateu, the soul of Peralada

At very young age, this Catalan cultural promoter became fascinated with music and art collecting. Her prominent three-decade contribution and devotion to the arts earned her prestigious honours including the Cercle del Liceu Gold Medal (2009), the Government of Catalonia’s Creu de Sant Jordi (2000) and the Gold Medal of Merit in the Fine Arts (2017), awarded by the Spanish Government’s Council of Ministers, a distinction that she was ultimately unable to physically attend to receive. Similarly, in 2011 she was honoured with the title of Adoptive Daughter of the town of Peralada, receiving the highest distinction from its Town Council, the Roc d’Or, for her great cultural and business contribution and for the love and esteem of the entire town, which she earned thanks to her warmth and friendliness.

The decades of immense work of cultural patronage of Carmen Mateu and her family is unique in its field, given the magnitude of the festival as a project, and the intense personal commitment to both the vocation of music and social responsibility.

Today, the children of Carmen Mateu and Arturo Suqué –Isabel, Javier and Miguel– and the entire team of the organization –under the direction of Oriol Aguilà– continue to uphold this commitment to the original spirit of the Castell de Peralada International Music Festival, and have managed to conserve opera and dance as the pillars of its identity. Season after season, meeting challenges and working with the same passion and enthusiasm as those of its founder, the programme offers new proposals to uphold the Festival’s position as an international event of prestige that is hailed and enjoyed by thousands of people every summer.

About the Castell de Peralada Foundation

The Castell de Peralada Foundation was created by the Suqué-Mateu family as part of an initiative to stimulate, promote and host cultural activities, which would most notably include the Castell de Peralada International Music Festival, and as of this year, 2019, the Carmen Mateu Young Artist European Award for Opera and Dance. Its objectives also include the national and international promotion of the Empordà–Costa Brava region as a destination, through sports, care, civic and social projects.

This foundation forms part of the Peralada Group, a family corporation with an active presence in sectors including leisure and entertainment, culture, winemaking and industry.

Created by Carmen Mateu and her husband, Arturo Suqué, the Castell de Peralada International Music Festival was first held in 1987. Inspired on the ideas of Montserrat Caballé, a friend of the family, this festival aspired to become the biggest summer opera event in the Mediterranean. This festival, a pioneer in its concept and the only of its kind to be held year after year thanks to private patronage, celebrated its 33rd edition in July and August of 2019.

Thanks to its active contribution to the dissemination of culture and music, the Castell de Peralada International Music Festival holds a unique place and has become one of the most important and ambitious artistic events on the Spanish art scene. Today, it is a must for lovers of culture and it has amassed the recognition of artists, audiences and critics around the world.

The participation of great artists and dance companies, the Festival’s own production, the support of countless composers and the promotion of up-and-coming artists bear witness to the uniqueness and quality of this festival, which combines tradition with cutting-edge development and innovation. Positioned as a benchmark for excellence in the spheres of opera and dance, both in Spain and abroad, each year the Festival offers a programme designed with all the enthusiasm, passion and devotion of its founder.

This prestigious event is held in the emblematic 14th-century castle owned by the Suqué Mateu family. Through the years of uninterrupted annual dates with its faithful, large audience, the beautiful gardens and venues of the Castell de Peralada have accommodated public figures including Lady Di and Queen Sofía of Spain, while hosting the performances of great artists to the likes of Plácido Domingo, Montserrat Caballé, Josep Carreras, Rudolf Nuréyev, Roland Petit, Joan Manuel Serrat, Calixto Bieito, Mario Gas, Teresa Berganza, Ángel Corella, Jaume Aragall, Julio Bocca, Jonas Kaufmann and Juan Diego Flórez, among many others.

This event boasts a truly special atmosphere and an unrivalled allure that brings together the natural landscape, the region, the climate and top-notch gastronomy. Its privileged location, as well as the proximity to some of the biggest names in haute cuisine, make the Peralada proposal truly matchless. All the performances on the programme are held in a privileged setting, as the French-style gardens –with a surface area of nearly eight hectares– are the chosen backdrop of extraordinary cuisine, culture and music each year.

The Festival’s corporate patronage forms part of the Peralada Group’s corporate social responsibility policy and boasts the support of some fifty companies, brands and institutions that sponsor the event summer after summer. As a result, more than 700,000 viewers have enjoyed the Festival over the past thirty years. The economic support of the Peralada Group has enabled the Festival’s consolidation as its own production platform for opera performances.

This event also serves to promote the Empordà–Costa Brava region as a destination, while generating an economic impact of over €12 million in the area. 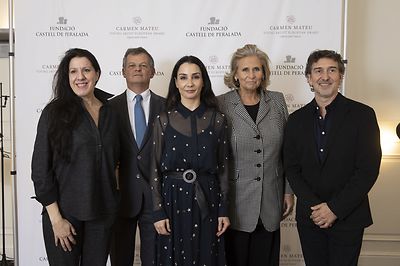