The pandemic crisis we are suffering and its social and economic consequences have stressed the major role that culture plays in overcoming this crisis. Culture has proven to be the most valuable space for rediscovering values such as creativity, awareness, endeavour, solidarity, dialogue and the ability to transcend. But it has also confronted us with many of the shortcomings in the arts and culture sectors. A fact that we must correct in order to take advantage of their strength and potential for relaunching the European Union project and quality of life for citizens.

Europe’s rich cultural diversity is a key element for overcoming this profound crisis, which has affected all countries and involves the responsibilities of local, regional, federal and state administrations within the European Union.

Promoted by the Cercle de Cultura in Barcelona, this initiative was launched on 23 April and is now headed by the State Federation of Associations of Cultural Managers, FEAGC (Madrid), A Soul for Europe project (Berlin), the European Festivals Association (Brussels) and Alternativas Foundation (Madrid), and it also enjoys the support of several personalities linked to the arts and culture sectors as well as European institutions.

It is an open initiative that wants to share leadership with all institutions, organisations and professionals wishing to join. It aims to unite forces among all the arts and culture sectors in each of the countries of the European Union and also others that share a direct link, such as the creative economy, innovation or tourism. Together, we will be stronger. More culture! More Europe!

This is why we are proposing, through this Manifesto, that European institutions encourage Member States to work on a process of development and improvement of support and funding mechanisms by more profoundly incorporating the strategic nature of culture into the European construction project.

Endorse the Manifesto: add your organisation (at the end of the google form)

• Culture is a right enshrined in the Universal Declaration of Human Rights and an essential good that needs to be more profoundly incorporated into the European construction project.

• This means that culture must be protected and promoted with enough suitable resources that respond to this importance by Member States and also with the support and participation of European institutions.

• Culture should be more strongly integrated into the strategic plans for territorial, social and economic development at both national and European levels.

• We immediately need to incorporate “shock” measures aimed at injecting resources into the cultural sector. Beyond that of borrowing to overcome the crisis, we need to act urgently to preserve our cultural fabric by paying special attention to maintaining a balance between the public and private sectors.

• It is essential to launch measures to protect artists, creators, technicians and managers, as well as cultural companies, entities and institutions, as these are a source of wealth and work for many people.

• A major communication campaign is needed as soon as possible to raise awareness among European citizens about the fundamental value of culture in building a collective project of coexistence and the need for them to be involved in generating the viability of cultural sectors.

• We need to start working on coordination initiatives that can help Member States to have sponsorship and social participation laws that follow a European approval process and become a real stimulus for the participation of individuals and legal entities in financing and sponsoring culture.

• Work needs to be done to update the regulatory framework of the Member States that affects the cultural sectors by taking advantage of the true potential of culture in the strategic development of economic, social and territorial models.

• Culture sectors want to be considered as necessary as we have been in order to overcome this lockdown. But these efforts now need to be collective and European in scope. Only in this way will we be able to take advantage of the enormously rich cultural diversity of the European Union in relaunching its project for the future.

The manifesto is supported by:

Nele Hertling / Spokesperson for A Soul For Europe / Berlin

Pia Locatelli / President of Fondazione A.J. Zaninoni for cultural promotion and training and Former Member of the European Parliament / Italy

Teresa Riera / Former President of the Committee on Industry, Research and Energy of the European Parliament / Balearic Islands / Spain

Laura Bertran / Director of Primer punt: Communication and institutional strategy / Member of the Board of Cercle de Cultura / Catalonia / Spain

Jorge Avelino Fernández de León / Cultural Manager. Member of the board of the Spanish Academy in Rome / Asturias / Spain

Alfons Martinell / Honorary Director of the Unesco Chair: «Cultural Policies and Cooperation» / Member of the Board of Cercle de Cultura / Catalonia / Spain

M. Àngels Torras / Director of Serveis Territorials a Barcelona of the Department of Culture from the Catalan Government / Member of the Board of Cercle de Cultura / Catalonia / Spain

Organisations which promote the initiative:

The updated information with the new supports will be available on the web pages of the promoting entities: 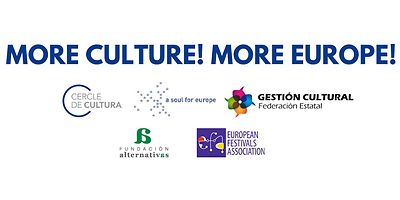