Before that Virus reared its ugly and voracious head in March, active communication and interaction between EFA members was an infrequent affair. Some would meet in Ateliers for Young Festival Managers, some in smaller delegations and conferences around the world; some in board meetings. True enthusiasts and those who savoured the companionship of an annual meeting would meet at the Assembly somewhere hospitable and explain their programmes. After 2017 they had bigger meetings to bring in new converts and the curious, and called them the festival summits. Groups of old friends and new converts with the new Arts Festivals Summit Format since 2017 would gather after sessions around coffee or a fresh flagon of wine. If Ireland was well represented, whiskey would flow. In truth though, there was always at least half the people at the gathering who one did not know or whose names one couldn't quite remember from a year or two before.

In between, EFA quietly went about its business, briefing decision makers, networking among Europe's cultural movers and shakers, pointing out to the world that there's always a festival happening or about to happen and we should visit.

And then the virus struck. Within two weeks live events were curtailed, cancelled or placed in jeopardy for the rest of 2020. Festival directors were at their wits' end as programmes collapsed, offices closed, finances evaporated and staff were sent home. The reactions ranged from wholesale panic to grim determination, all pervaded by that peculiar brand of fatalism that every arts producer has close to the heart.

EFA decided to consult the members, find out how they were doing and try to share and co-ordinate some of the ideas that began to surface about how to deal with the mess. Most of all, it was thought, EFA could be a sounding board so that festivals could realise that they were not isolated. So the Wednesday and then the Friday morning Zoom calls began. They were a chance to complain, fume, find some sympathy and tell each other what, if anything, funders were doing to save the day.

That was the aim, and all those things happened. But other things did too, surprising and hopeful, imaginative and new. As has happened for hundreds of years, a crisis in society brought about a chance for the arts to reassert their relevance, think outside the box, and face human stress unmasked. Festival leaders, freed of their usual concerns in the office, began to reimagine what they did, how and for whom.

Most of all they began to talk to each other – not in huddles of two or three in quiet corners – but in groups of fifty or more on screen simultaneously. These were not seminars, webinars or bars. These were sessions of real debate, eccentric opinions and wildly opposite visions. EFA has always been a meeting of equals but on Zoom the equality was emphasised. We were all the same size in our little boxes on screen. Some were lonely in offices, some in kitchens or book-lined studies. One was (probably illegally) on a train in the wrong country. There were garden views, terrace views and we found that quite important people live in quite modest houses. Often small children dropped in to 'help'. We realised that members ranged from the ancient to the ingenue, that some were always in jeans and t-shirts while others dressed as well for an online chat as for a pre-concert champagne reception.

At first these newly private executives bothered to brush their hair for the occasion but they soon relaxed and realised they could come straight from the coffee pot to the camera. Gradually the news spread. These sessions not only gave solace, they were a hotbed of fresh thinking. And the zoom chats gave many links to new information we could access. Not every idea was brilliant, some were clearly bonkers, but here for the first time were festival leaders thinking aloud, from home, every week or two. They were joined by artists, public officials, researchers, sponsors, venue managers, network bosses and artist-impressarios. In theory the attendees were split into groups – general sessions, 'Nassim Taleb’s Black Swan' new thinking, and the partnership with cities and European institutions. In practice, while guests came and went, the EFA members were present throughout.

Nobody missed having panels of speakers sitting on lofty platforms like professors at the head table in college. Now and again someone would forget that they were not the only one with opinions or information to impart and would have to be reminded gently. The ultimate sanction was the host's mute button: a truly effective weapon. For the most part, though, pomposity was kept in check. It's difficult to impose dignified superiority when we are all the same size, when age counts for nothing and when the grander a contributor's title, the less adept they are at sorting out their technology.

By summer, though, we were all tired. The immediacy of the crisis had receded and everyone realised that the difficulties will hang around for at least a year, probably much longer. As a new term begins, contacts and energy will be revived. Some festivals will have been postponed, others navigated a way to happen in physical form, some online. There is a legacy from these fraught months, though; a legacy of solidarity, new and rediscovered fellowship and an awful lot of fresh respect. EFA has renewed its mandate, putting its arm around the shoulders of friends throughout the world,  It's an embrace worth having. 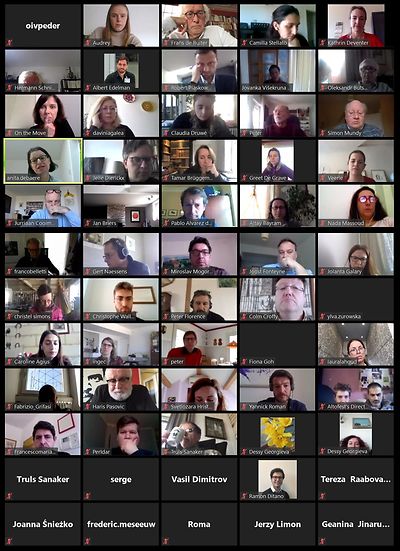