Arts Festivals all over Europe reconfirm the vital contribution of festivals for Europe with Mariya Gabriel, EU Commissioner for Innovation, Research, Culture, Education and Youth.

After more than a year of difficult challenges, festivals are still dealing with COVID-19. Even if the survival of many of them has been at stake, festivals have found the capacity to continue being a platform for artists and audiences.

In this crucial time, the festival sector plays an important role in Europe. Together with stakeholders from cities and the technology field, the European Festivals Association (EFA) - its 90 members, The Festival Academy’s alumni and the 2400 festivals registered on FestivalFinder.eu it represents - met EU Commissioner Mariya Gabriel on 22 June to speak about the vital contribution of festivals to Europe and to propose concrete ways of contributing to the European Commission’s agenda.

Deeply connected to the large and engaged communities they represent, festivals have an undeniable multiplier effect. They constitute the European investment seed for a series of spillover effects in various non-cultural sectors. In this context, festivals together with their local authorities but also other partners from tourism, media, academia and technology, are essential to the success of a bottom-up Europe in which citizens play a fundamental role.

Commissioner Mariya Gabriel said, “Festivals are an important driver of local and regional development, contributing immensely to social cohesion across generations. Therefore, I cannot see a better way to get citizens involved in a wide-ranging debate on the European Green Deal, the European New Bauhaus, or the Conference on the Future of Europe than through festivals. In this particular time, we need festivals to reach citizens and engage with them on their wishes and ideas for European integration.”

Developing the preparatory action ‘EFFE: Europe for Festivals, Festivals for Europe’ further, EFA’s proposal, as presented to the Commissioner, builds on a trans-sectorial collaboration between festivals and partners such as cities and the technological sector. It puts festivals' audiences at the centre and demonstrates how partnerships highlight new approaches towards audiences, enable festivals to leverage more investment; how cities and regions come on board but also how to exploit the latest technology to reach out to citizens.

EFA’s proposal includes using FestivalFinder.eu - the digital platform on which to interact with audiences - to its full capacity. This search engine for festivals in Europe and beyond is a tool that brings local content to audiences worldwide. It is also used by festivals to apply for the EU Label and Prize scheme for Festivals under EFFE, Europe’s community of remarkable arts festivals showing their engagement in the field of the arts, community involvement and international openness, as well as the EU’s priorities related to the Green Deal, the digital Agenda, sustainability and inclusiveness. Bart Temmerman, Director of publiq, added that a European Award for festivals could be a catalyst: it would be awarded not only by a jury, but by European audiences and serve as a driver for the entire festival ecosystem, thanks to FestivalFinder.eu and its open data. Commissioner Gabriel concluded the meeting by saying she is looking forward to seeing the idea of a European Festivals Prize developed and taken further.

EFA President Jan Briers said, “EFA has been a trusted alliance of festival makers in all European countries and beyond for almost 70 years now. We, as arts festivals, have a strong place in the positive vision of the European Union and its responsibilities in the world. As such we are glad to be the Commission’s dialogue partner.”

Contact: If you would like an interview with EFA’s President, EFA’s Secretary General or one of the participants listed in the presskit online, please contact: Audrey Brisack, EFA’s Communication Manager, audrey[@]efa-aef.eu - 0032 (0)472 52 72 32 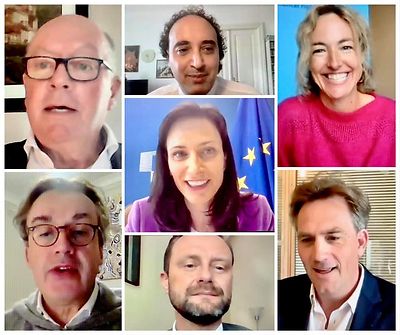