Festival dos Canais 2021 returns to the city with exciting programme

Festival of the Canals, a special edition

The annual multi-disciplinary festival “Festival dos Canais” returns to Aveiro from 15 till 18 & 23 till 25 July and invites everyone “to get lost in the city”. The edition 2021 will present 50 performances by 80 artists and collectives from 11 countries, including 8 local artists works. Furthermore, two novelties will become an integral part of the festival’s edition - broadcasting on the Festival dos Canais TV channel on social media and the Audience Award given to their most exciting and recognised performance in the festival. Music, theater, dance, new circus, visual arts, activities for children, and several other artistic areas will be represented in the festival with 11 national premieres performed in various locations around the city. Admission is free of charge.

MUSIC:
The festival will once again feature headliners on two main concert stages located at Praça Marquês de Pombal and ATLAS Aveiro staircase which will welcome artists as Tiago Bettencourt, The Black Mamba, Gisela João, D.A.M.A, Matay and Bárbara Bandeira as well as a unique concert given by the aveirense band Troll's Toy with the Orquestra Filarmonia das Beiras. The traditional stage of the ATLAS Aveiro staircase will host performances by musicians such as Bia Maria, Navega, The Twist Connection, Labaq, Lobo Mau, Curt Davis, and Cabrita.

CONTEMPORARY CIRCUS:
Very special moment of the festival is going to be a presentation of the contemporary circus show "Perceptions" by the French company "Compagnie Bivouac". It is a journey into the heart of the quantum imagination, where the infinitely large merges with the infinitely small. Everything revolves around a large-scale mechanism that promises to surprise the audience at the Fonte Nova Pier.

Another moment is a performance "Só" (Lonely) by Xampatito Pato at Praça da República. A new circus show about an obsessive and meticulous character surrounded by countless boxes that escape his control and with which he plays to shape his world.

DANCE:
A special moment on this year's edition will be Delrevés company vertical dance performance “Uno” with three performers using the facade of the Cine-Teatro Avenida building as a stage. As for the performance “Rise" by Wonderground Company, at Largo de São Gonçalinho, it's an invitation to an experience that appeals to the feeling of community and that makes the space a ritual for transformation.

ARTISTIC INTERVENTIONS ON THE RIA:
After a successful debut last year, the project "Ilhas Suspensas" (Suspended Islands) returns in 2021 with four itineraries along the outer channels of the lagoon. Spectators will be taken by boat to enjoy the natural landscape and experience artistic interventions in various locations that are created in a dialogue to the unique character of each place.

THEATRE:
Giving a special attention to the city's cultural heritage and featuring a work done by one of the most interesting national playwrights and choreographer, Lígia Soares, the show "Memorial" is going to take place in the cloisters of the Aveiro Museum / Santa Joana. On the stage two women in a future time, washing sports shoes in toxic water.

CHILDREN PROGRAMME:
As usual, the children will also be treated with special initiatives starting with the festival's playground, installed at Cais da Fonte Nova to a sensory trail and several performances, one of which will be translated into Portuguese sign language. The show-installation "La Caixeta" by the Holoqué company promises to be an astonishing - a giant music box that will emerge the spectators in a love story, with holograms and technological surprises. A lot of humor is going  to sparkle in the "De Risa en Risa" at the Parque Municipal Infante D. Pedro where the Mexican artist Aziz Gual is going to guide the children through the mysterious world of laughter, interconnecting clown numbers and moments of dexterity and skill, between unicycle, balancing, juggling and musical instruments.

The Old Captaincy Building once again will become a visiting point, where the project "Metamorfoses nos Canais" (Metamorphosis in the Canals) will take place. It is custom-designed for this particular location and includes several performances, as well as installations, workshops, and other artistic manifestations, with a total of 12 proposals that will be repeated throughout the days.

VISUAL ARTS:
There are two must-see works in the field of visual arts. At Mercado José Estevão, one can explore an installation "Esculturas Suspensas" (Suspended Sculptures) by Patrícia Geraldes. Passing by the Old Captaincy Building, the sculptures of the Polish artist Ola Korbanska can be found.

Until 25 July, there will be an open call to raise pieces for the Museum of Broken Relationships as a pop-up project at the Aveiro / Santa Joana Museum. Later on (August to October, 2021) there will be an exhibition of the project in Aveiro with the pieces and stories collected. The Museum of Broken Relationships is an international project from Croatia formed by objects that tell stories of love and unlove, in which anyone can contribute by offering an object with emotional meaning.

NEW FEATURES AND ABSOLUTE PREMIERE:
A new feature of the Festival dos Canais is the creation of the Audience Award for the best show that will be determined by voting on the festival's social media.

Thus, absolute premiere in this edition is the Festival dos Canais TV, a broadcast on social networks with interviews, reporting and highlights of the festival followed throughout the event.

The Festival dos Canais is completely free, and tickets will be available one hour before each festival activity at the respective venue, except for the concerts at Marquês de Pombal Square in which tickets can be picked up one and a half hour before the beginning at the Aveiro Museum / Santa Joana. 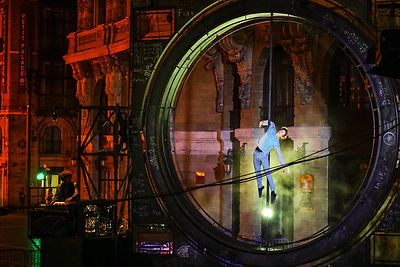