Composer, violist and Artistic Director of Kuhmo Chamber Music Vladimir Mendelssohn passed away on 13 August 2021 after a short illness. He was born into a celebrated family of musicians in Romania in 1949. He studied viola and composition in Bucharest. Later he settled in the Netherlands and toured the world playing and teaching. Mendelssohn was particular known and liked as a sensitive performer of chamber music, which he played in a wide variety of ensembles. His regular ensemble, however, was the Enesco String Quartet.

In Finland Vladimir Mendelssohn was mainly known as the Artistic Director of Kuhmo Chamber Music. He has played at Kuhmo since 1983 and he became Artistic Director in 2005. Thanks to all his contacts in the world of music and almost unsurpassed musical knowledge, from one year to the next he was able to produce for Kuhmo unexpected and original programmes, in which famous classics alternated with rarities and new discoveries.

At Kuhmo we came to know Vladimir as a polymath, a man with an astonishing range of knowledge and endless energy. With him it was a fascinating experience both to play and to talk. Although he performed everywhere, he had a special relationship with Kuhmo Chamber Music.

‘Kuhmo was my academy,’ he said. ‘Here I learnt what music was. I learnt to play my instrument and to understand music more deeply than anywhere else.’

At this year’s Festival, Vladimir Mendelssohn’s illness was already evident, but that was not the case when he played. The sound of his viola continued to glow and merge seamlessly with the whole. Mendelssohn discovered how serious his condition was during the Festival.

Nevertheless, he wanted to play Schubert’s Trout Quintet again before he left. He had been playing the Schubert piece at Kuhmo since 1983. In the church at Kuhmo on 13 July 2021 there was tumultuous applause from the audience, as if they knew that the great musician had just played for the last time.

But at the final concert of the Kuhmo Chamber Music Festival this summer we had a chance to appreciate once again the diverse musical abilities of Vladimir Mendelssohn. The very last item on the programme was his arrangement of Beethoven’s ninth symphony. Vladimir’s time at Kuhmo had ended just the way he liked – with the Ode to Joy!

(Photo: Vladimir Mendelssohn after the first performance of his composition Mata Hari in 2019 at the Kuhmo Chamber Music. Photographer: Stefan Bremer) 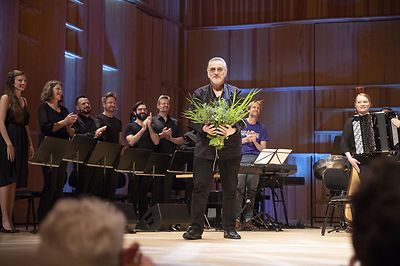