The members of the European Festivals Association (EFA), the festivals community and their stakeholders came together in Galway for the Arts Festivals Summit from 22 to 24 November 2021, in person and online. During the General Assembly meeting, EFA members voted in ten new festivals to join the association and elected the new board of directors.

“Under continual construction” remains EFA’s guiding line. This crisis has shown the best of the artistic and cultural sector; its solidarity, creativity, and strong capacity to reinvent itself, supporting the work of artists and bringing the arts to audiences. It has also highlighted new challenges and opportunities that need to be explored and discussed.

A moment of reconnection

After almost two years of online meetings and events and in this fragile time, EFA’s Arts Festivals Summit was a moment of connection, exchange, networking and togetherness for the festivals community in the vibrant city of Galway. 110 delegates from all over Europe and beyond as well as 50 online delegates came to Galway or joined through zoom or livestreams from 22 to 24 November 2021. Hosted by the Association of Irish Festivals and Events (AOIFE), the Summit was also the occasion to meet the Irish festivals, to speak about potential collaborations and co-production projects, to dive into the Irish culture with “Walk and Talk tours”, to listen to showcases by local artists, and to discover the beautiful landscapes of Galway Bay.

A new EFA Board

Next year EFA will turn 70. It will be the beginning of a new decade for the association, in which it will continue to include cities, the business sector, the media, academia, etc. in its future conversations about the arts and the role of arts festivals in our societies.

The Festival Cities Round Table was introduced by a strong keynote speech "This is what you came for" by the socially engaged artist Els Dietvorst. She uses dialogue, experiment and intuition to address social issues such as migration, racism and climate change.

The Round Table gathered cities representatives and festival makers to discuss opportunities for collaboration and included the presentation of the EFFE Seal for Festival Cities and Regions. Developed by seven cities and their stakeholders (Belgrade, Bergen, Edinburgh, Ghent, Krakow, Leeuwarden, and Ljubljana), the EFFE Seal is paving the way in this direction. It is an initiative to inspire, support and promote collaborations between festivals and cities. It will be launched during EFA’s next Arts Festivals Summit from 2 to 5 May 2022 in Yerevan, Armenia.

“We are excited about the opportunity to host the Arts Festivals Summit in Armenia, in Yerevan next year. We will launch many initiatives and we will premiere new compositions. We will do everything to make the delegates’ stay memorable and fruitful”, said Sona Hovhannisyan, the General Manager of the Yerevan Perspectives International Music Festival that will host the Summit in 2022.

Contact: If you would like an interview with EFA’s President, one of the new members of the board of directors, EFA’s Secretary General or one of the new EFA members, please contact: Audrey Brisack, EFA’s Communication and Network Manager, audrey[@]efa-aef.eu - +32 (0)472 52 72 32 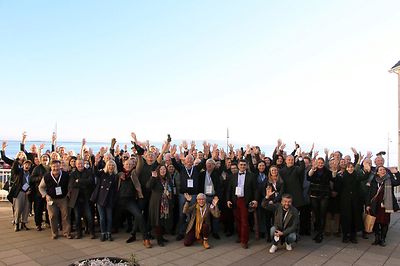