"Arts is the matrix of each festival, as is the community, the space and the city. There is no community without the arts." is EFA's credo when bringing festival makers together with their city mayors and representatives.

3 days in Krakow confirmed exactly this: During the meeting with mayor Jacek Majchrowski, the excellent work the city is doing for its festivals was confirmed. Thanks to Robert Piaskowski, the Plenipotentiary for Culture who is in charge of Krakow's cultural affairs, the city is one of the 7 founding cities of the EFFE Seal that will be launched in Yerevan during the Arts Festivals Summit 2022. Their commitment reflects the city’s eagerness to develop its festival policy further, strengthen the potential of festivals in the frame of major political agendas such as the Sustainable Development Goals and others, as well as to develop a way of dialogue with the festival sector on a structural level.

This meeting took place during the Divine Comedy Festival, known as Boska Comedia. What an energy, a dynamic, a contemporary look at society, and an active player! The festival is strongly determined to let all voices and positions have their place and relevance, with the artistic freedom of expression first and foremost in the attention. The festival does not only portray the excellence and diversity of polish and international theatre in 50 productions (wow!), it also brings attention of programmers and therewith audiences worldwide thanks to the presence of many international delegates.

For the competition, the Divine Comedy Festival has set up an international Jury, including Haris Pašović, director of Sarajevofest Art and Politics (one of our EFA members) but also new and longstanding colleagues like Katerina Evangelatos, artistic director of the Athens Epidaurus Festival.

The festival would not be complete if it did not offer a series of reflection talks and conversations about the arts, festivals, and burning issues within our societies. "How to survive the apocalypse?" was the title of a talk moderated by Kathrin Deventer, EFA's Secretary General, and Robert Piaskowksi. It was introduced as: “A few years ago, we participated in discussions about the "festival" of cultural life. Radicalists believed that festivals were more harmful to the culture-forming tissue and their creative impulse was overestimated. The supporters of festivals saw them as a development potential, contained in the confrontation of achievements, in the potential for exchange, and in achieving quality through diversity. Some focused on the primacy of organic work, others emphasised the festival's prestige, which is not without significance for the general public. Is this dichotomous division not an anachronism today? This discussion must come back and refer to an in-depth analysis, especially in the face of the post-pandemic crisis. In culture, it means not only financial shortages and a reduction in audience, but the necessity to set new goals and challenges. What is the current situation of festivals in Europe? Is the pandemic a development impulse or does it generate stagnation?"

The conversation was conducted by the following participants:

It is crucial to keep on offering a platform for audiences, for citizens, for tourists and visitors of cities alike and this in order to discover the arts of a specific location at a specific time. "Cities and its citizens need to invest further into artists and their works", said Katerina during the talk. A statement that everyone should keep in mind when we think about our future. 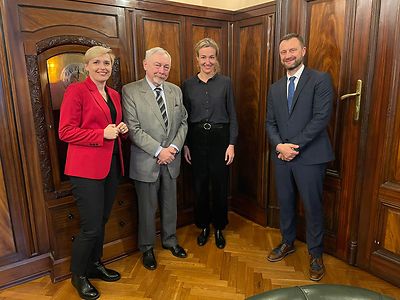